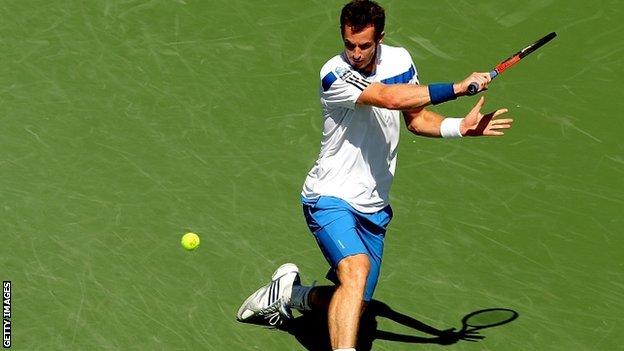 Andy Murray responded to last week's early exit in Montreal with a thumping win over Russian Mikhail Youzhny in the second round of the Cincinnati Open.

Murray, given a bye in round one as the second seed, but had few problems in seeing off Youzhny 6-2 6-3.

He will play Frenchman Julien Benneteau in the last 16 on Thursday.

Murray, 26, is looking to get matches under his belt ahead of his US Open title defence, with the final Grand Slam of the year getting under way on 26 August.

He was sharp from the outset against Youzhny, whom he beat on the way to winning Wimbledon last month, and raced into a 4-0 lead before serving out the set.

Two more service breaks at the start of the second set put the Scot within sight of victory and, although Youzhny cut the deficit to 4-3, Murray broke for the fifth time in the match to seal victory after one hour and 10 minutes.

"I prefer the conditions here," said the world number two. "It's actually quite cool today, but the court suits my game a little bit more here so I felt a bit more comfortable, I moved pretty well.

"It was an important match for me to get through. Obviously I want to try and get as many matches as possible this week before the US Open.

"I only got a couple last week so I was a little bit nervous before the start of the match because it was important to get through this one.

"I didn't make too many mistakes, I just tried to play a solid match and find a way to win today."#

In the women's event, top seed Williams was given an early scare by Eugenie Bouchard but eventually saw off the Canadian 4-6 6-2 6-2 in the second round.

"It was just really different conditions than Toronto," said Williams, who has never been beyond the semi-finals in Cincinnati.

"And I always forget that it's so different here. So it took me a while to get used to it. I have to get used to them because this is a tournament I don't have on my roster. And if I play like today, I'll continue not to have it."