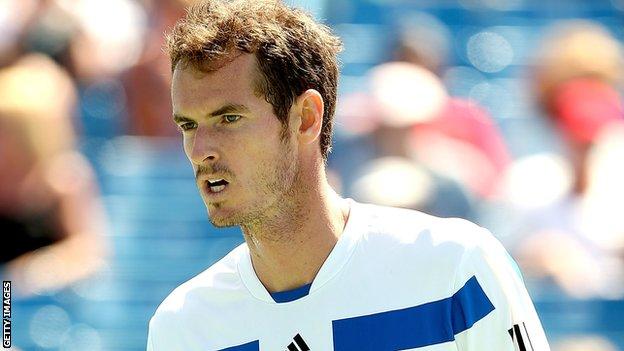 Britain's Andy Murray continued his impressive form at the Cincinnati Open with a 6-2 6-2 win over Frenchman Julien Benneteau in the third round.

The world number two broke twice in the opening set as Benneteau struggled with his first serve percentage.

Benneteau, ranked 36, improved in the second, but Murray broke twice more to seal the win and set up a quarter-final tie with Tomas Berdych on Friday.

Federer, a five time winner in Cincinnati, will play Nadal in the last eight. The pair, who have played each other 30 times with Nadal winning 20, are fourth on Centre Court on Friday.

With less than two weeks until Murray, 26, starts the defence of his US Open title he was showing flashes of the form that won him his first Grand Slam almost 12 months ago.

The Wimbledon champion gave Benneteau few openings on his own serve, hitting seven aces and winning 75% of the points on his first serve and 62% on his second.

In comparison, the world number 20 won just 65% on his first serve and just 31% on his second and he created only one break point on the Murray serve.

Murray said: "You want to try and get off quickly because you need to play the next day.

"In 10 days' time, we're going to have to play best-of-five sets, so sometimes the long matches can kind of set you up for that well.

"But in terms of winning this event, better to get off quick because you have to play five days in a row if you want to win."

World number one Djokovic joins Murray in the last eight after he beat qualifier David Goffin 6-2 6-0 in just 50 minutes, to set up a last eight tie with John Isner, who beat 12th seed Milos Raonic of Canada 7-6 (7-5) 6-4.

Defending champion Federer, who is only just returning from a back injury, had to come from a set down to beat number 11 seed Tommy Haas.

Nadal, who has won eight of the 11 tournaments he has played this season, said: "To play against Roger is always a special feeling. We have a great history behind us in our confrontations.

"But it's a quarter-finals match, not the final, so that's a big difference."