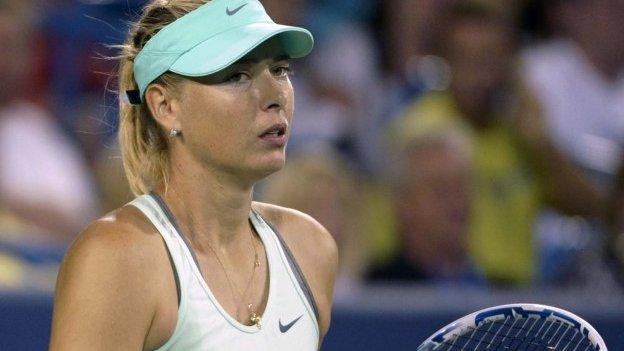 World number three and former Grand Slam-winner, Maria Sharapova, has split from coach Jimmy Connors after just one match together.

Sharapova announced in July that Connors would be taking over from Thomas Hogstedt.

But the Russian lost to American Sloane Stephens in their opening game at the Cincinnati Open on Tuesday.

"It's not the right fit for this time in my career," Sharapova said in a statement.

Connors, 60, watched on from the stands as Sharapova, in her first match after a seven-week injury lay-off, made 62 unforced errors in her loss to Stephens.

He tweeted after the match: "Every good round starts with a bogey - not the start we wanted, so back to work tomorrow."

Sharapova worked with American Connors in 2008, just before the Australian Open.

She won three Grand Slam tournaments between 2004 and 2008, adding the French Open in 2012 to her list of major titles and complete a career Grand Slam.

Connors previously coached Andy Roddick, who he helped reach the final of the US Open in 2006, the semi-finals of the Australian Open in 2007 and the quarter-finals of both Wimbledon and the US Open that year, before they split in March 2008.

Connors won five US Open titles, Wimbledon twice and the Australian Open once as a player, topping the world rankings from July 1974 to August 1977.

The split leaves Sharapova without a coach heading into the US Open which starts on 26 August.