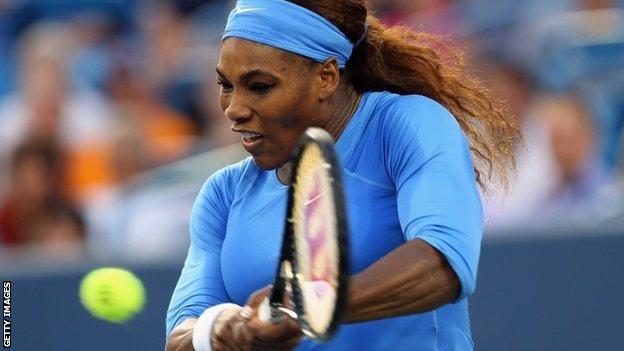 The American recovered from set point down to take the first set and then held her nerve after a series of breaks in the second to seal the match.

Williams, 31, who is seeking a career-high ninth title of the year, will meet Victoria Azarenka in the final.

The second seed Belarusian came from a set down to beat Serbia's Jelena Jankovic 4-6 6-2 6-3.

Victory for Williams on Sunday would be her first Cincinnati title and beat her best haul of eight tournaments in 2002.

The American has 54 titles, putting her fifth on the all-time list behind Martina Navratilova, Chris Evert, Steffi Graf and Lindsay Davenport.

But it was a less than convincing victory for Williams, who raced to a 4-1 lead in the first set before China's Li reeled off four games to serve for the set.

A double fault from Li at set point let Williams back in, and the American promptly won the game and the next two to take the set.

Both players struggled to hold serve in the second, with Li, the fifth seed, having another opportunity to serve for the set.

But Williams broke back and then managed to hold serve to win reach her first Cincinnati final.

I noticed it was a lot of breaks but who really cares?

"I came in here not playing my best and now I'm in the final. It's just almost weird," said Williams, the reigning French Open champion.

"It was definitely a little scratchy but I was able to get through. I just tried to stay positive.

"When I was down, I just got really relaxed and I felt like 'Serena, you don't really have much to lose. So just kind of relax and get through it'."

While Williams struggled with her serve, it was nothing compared to a woeful display from Azarenka and Jankovic.

Of the 27 games played, 23 ended in breaks, with the duo clocking up 20 double faults between them.

When asked about the number of breaks, Azarenka, 24, said: "I don't care about that. As long as I won the match, that's all that matters, and I didn't count.

"I noticed it was a lot of breaks but who really cares? I think everybody kind of struggles with a serve here for some reason, but whatever."