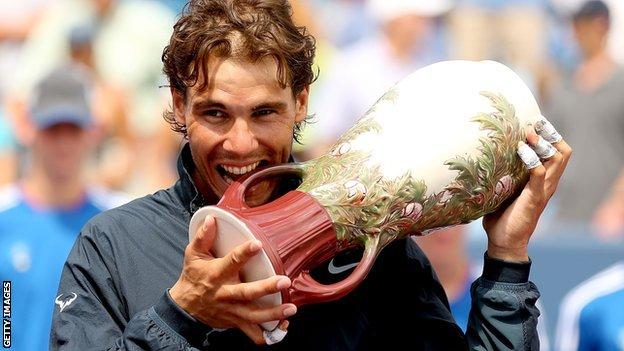 Nadal, 27, saved two set points in a tight opening set and came through another tie-break to seal victory and clinch his 59th career title.

"It's very special for me to win here," said Nadal, who starts his bid to win a second US Open title in eight days.

I can certainly hold my head high when I look back at this tournament I just played against one of the best tennis players in the world.

"This one was the first one I felt I was actually playing well. Congratulations to John and I'm sorry for today, but I'm sure if you continue you will have a lot of chances to win tournaments like this."

Nadal's victory came one week after he beat Canada's Milos Raonic to win the Rogers Cup in Montreal.

The 12-time Grand Slam champion set up the final with Isner after a straight-sets win over Tomas Berdych - who had knocked out Wimbledon champion Andy Murray. earlier in the tournament.

The American made the world number three work for his service games and missed a late chance in the first set when Nadal saved two set points with two forehand winners to level the match at 6-6.

The duo fought to 8-8 in the tie-break before Isner volleyed the ball into the net to give Nadal set point and the former world number one clinched it when the American's return fell short of the net.

"I can certainly hold my head high when I look back at this tournament. I just played against one of the best tennis players in the world," Isner said.

Nadal started to move Isner around the hot Ohio court with clinical cross-court forehands and volleys but again the match went with serve.

Two thunderous forehands put Nadal two match points away from victory in the 10th game but the hard-working Isner extinguished the Spaniard's chances with two inch-perfect backhands to level the match at 5-5.

The set went into a second tie-break but it was the two-time Wimbledon champion who held his nerve to take a 5-3 lead before clinching victory in the 10th point.