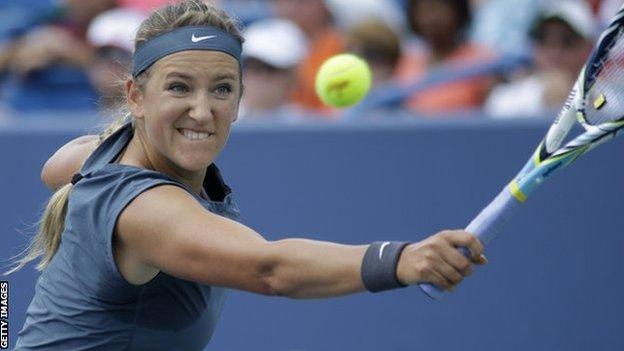 Williams was looking to claim three titles out of three since her fourth-round exit at Wimbledon.

But after she won the first set, Azarenka hit back to claim the third on a tie break in a match that lasted two hours and 30 minutes.

The top seed had looked on track for victory when she swept through the first set, taking both of her break points and winning 28 out of 39 points in total.

But she went 4-1 down in the second set after a string of unforced errors and although she managed to save seven break points in the next game to avoid a third break of her serve, Azarenka held and then did break again to win the set 6-2.

Azarenka then broke for a 4-2 lead in the decider but Williams hit back straight away before breaking again to lead 5-4.

That left her serving for the match but she fell 40-15 behind after netting a forehand and was broken as Azarenka produced a superb return right to her feet.

The second seed held serve but Williams served out to 15 to set up a tie-break.

Azarenka made the first move and opened up a 3-1 lead but then fell 5-4 behind after losing successive service points.

That left Williams needing to win her two service points to take the title - but she missed a glaring opportunity on the first after opening up the court with a drop shot and then double-faulted on the second.

Azarenka sent a backhand long on championship point but set up another with a deft volley and Williams netted a forehand to give Azarenka her third win over the American in 15 matches and second this year after success in the Doha final.

"What doesn't kill you makes you stronger," said Azarenka, who has only played in 10 tournaments this year after suffering injuries at both Wimbledon and earlier this month in California.

"I'm really excited to be back playing. The last month was really tough."

Between them, Williams and Azarenka have claimed five of the last seven Grand Slam singles titles, dating to the 2012 Australian Open, and Williams was full of praise for her opponent.

"I have tough matches, particularly against her. We go against each other really tough. It's a good rivalry. I'm number one, she's number two. So we have that rivalry which consists of meeting in the final, which makes it even more so exciting."