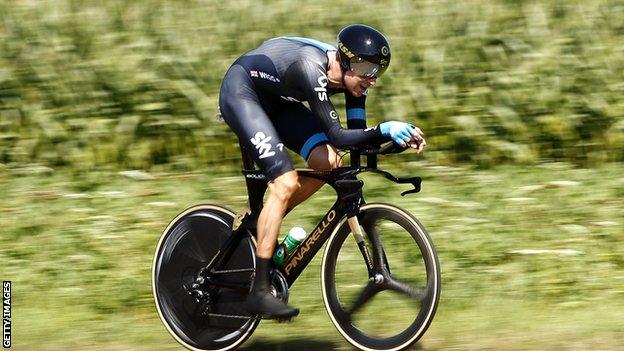 Britain's Bradley Wiggins says he will quit road racing at the end of next season in order to return to the track.

The 2012 Tour de France winner, who already has four Olympic titles, said: "I'm going to continue to the next Olympics and try for a fifth."

Wiggins, 33, also told The Times: "It would be nice to finish the career with another Olympic gold."

He was unable to defend his Tour de France crown in 2013 because of injury but wants to ride it one more time.

Wiggins acknowledged that making a return to the Team GB track line-up would not be easy.

"Having lost weight and muscle the last few years I wouldn't be able to walk back into the team pursuit squad, so I'm not taking anything for granted, but I am working towards that."

Having previously indicated he may never compete in the Tour again, he said he would like to take part in 2014 if selected by Team Sky.

He also suggested he was willing to support this year's winner Chris Froome.

"I don't mind admitting that Chris is probably a better Grand Tour rider than me," Wiggins said.

"He is a much better climber, he can time-trial well. [At 28] he has age on his side, he has no kids, that's fine. If Chris wants to, he could potentially win five Tours now.

"So if I want to win another Tour, I'd probably have to leave the team.

Wiggins won six Olympic track medals, including three golds, before switching to the road after the 2008 Games.

Froome reportedly said recently that Wiggins had not congratulated him on his Tour victory.

Wiggins said there was a simple reason for that: "For a start, this is a pathetic excuse - and it's not an excuse - but I don't have his phone number.

"Rather than me send him some naff little text message, I would rather wait till I see him, genuinely put my hand out and say 'you know what, that was a good ride'.

"That is more genuine than one text message that might get lost in hundreds of others.

"Obviously once the press got hold of it, it got chewed up a bit and then it would have been really naff to have sent one.

"But I will see him at the World Championships where I will be riding to support him. So this was not me saying, 'I'll never ride for him again'."