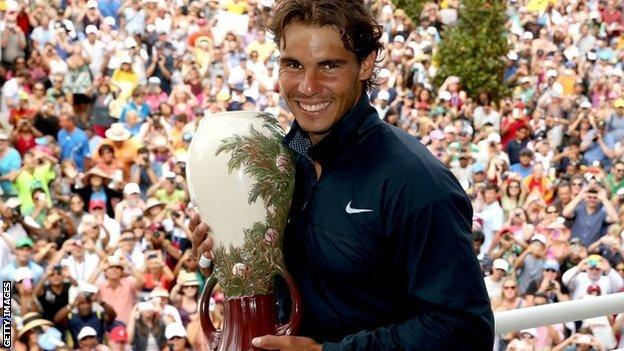 Rafael Nadal will head to the US Open as world number two after winning the Cincinnati Open on Sunday.

He has overtaken defending champion Murray, who is set to be named third seed for the final major of the year which starts in New York on 26 August.

Roger Federer drops to seventh, his lowest ranking for 11 years.

Laura Robson is in line to be the 31st seed - the first time a British woman has been seeded at a Grand Slam since Jo Durie at the 1987 Australian Open.

The 19-year-old, who made her major breakthrough by reaching the fourth round at Flushing Meadows last year, is an injury worry because she has been struggling with a wrist problem.

Heather Watson, the 2009 junior champion and world number 77, is the other Briton with direct entry into the US Open singles draw.

Nadal is enjoying his best ever run on hard courts. The Spaniard, 27, beat John Isner to claim his ninth title of 2013 at Cincinnati. He has won all 15 matches on the surface in 2013, taking Masters titles in Indian Wells and Montreal.

"First of all, I won a very important tournament, a Masters 1000," he said after beating Isner.

"I was playing for a lot of points this week and I'm in a good position."

It is a remarkable turnaround for the 12-time Grand Slam champion, who was out for seven months with a knee injury following last year's Wimbledon.

He slipped as low as fifth in the rankings but now returns to number two for the first time since July 2012.

Since returning from injury in February, Nadal has reached the final in 11 of the 12 tournaments he has played, winning nine, with his only early exit coming against Steve Darcis in the first round of Wimbledon.

He now heads to New York looking for his second US Open title, and in position to go on and end the year as the world number one.

Murray has reached the final of the last four Grand Slams he has played, winning at the US Open and Wimbledon, but slips to three in the latest rankings.

Federer has fallen two places from fifth after a season in which he lost in the second round at Wimbledon and fell in the semi-final in Australia and quarter-final at the French Open. He has lost a quarter of his 40 matches in 2013.

The US Open draw takes place on Thursday in New York.