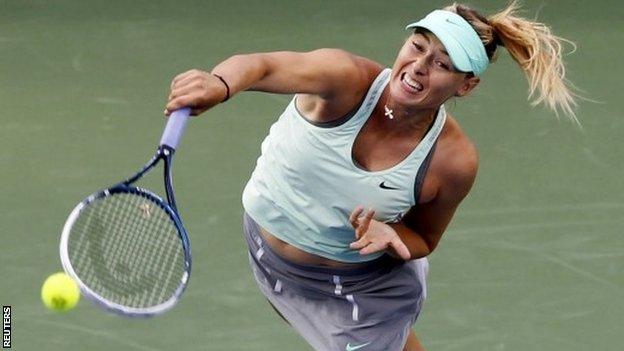 Maria Sharapova has pulled out of next week's US Open with a shoulder injury.

The 2006 champion, who was seeded third for the tournament, is suffering from inflammation in her right shoulder.

"I've done everything I could since Wimbledon to get myself ready but it just wasn't enough time," the 26-year-old Russian said on her Facebook page.

"I have done many tests, received several opinions and it all comes down to taking the proper amount of time to heal my shoulder injury properly."

The four-time Grand Slam champion added: "It's certainly not an easy decision to make ahead of one of my favourite tournaments, but I know it's the right one that will get me back on the courts soon.

"I plan on taking the next few weeks off, receiving proper treatment and rehabilitation."

The Russian has suffered with shoulder injuries in the past, missing nine months after surgery in 2008.

Tournament director David Brewer said: "We wish her a speedy recovery and look forward to her return to New York next year."

Poland's Agnieszka Radwanska moves up to number three in the seedings and Russia Anastasia Pavlyuchenkova becomes the number 32 seed.

Sharapova's withdrawal comes a week after her split from coach Jimmy Connors following just one game together - a defeat by American Sloane Stephens in her opening game at the Cincinnati Open.

Sharapova completed a career Grand Slam when she added the 2012 French Open title to her 2004 Wimbledon, 2006 US Open and 2008 Australian Open victories.