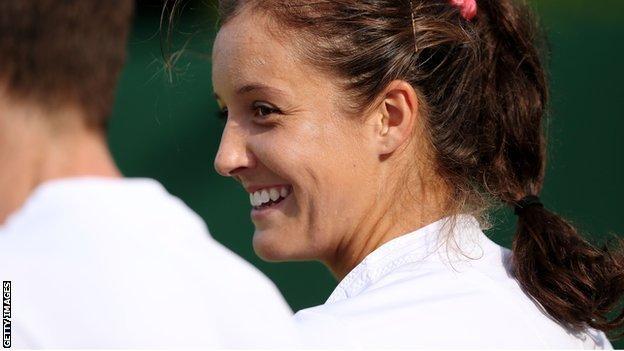 British number one Laura Robson says she will be "fine" for next week's US Open after recovering from a wrist injury.

The 19-year-old left-hander injured her right hand in practice and has played just two matches since Wimbledon.

"I've been limited but I've had some good practice days for the past week and feel pretty good," said Robson, who faces Spain's Lourdes Dominguez Lino.

"I played points on Friday morning and Thursday. I'll be fine."

Robson made her major breakthrough at Flushing Meadows last year when she reached the fourth round.

I think I'm playing well, so hopefully I'll win a couple of matches, but at the same time I'm also just happy to be playing

She has set no target of how far she can go this year in New York, despite having significant ranking points to defend.

Robson's last match was a 6-1 6-2 defeat by third seed Petra Kvitova at the Southern California Open as she withdrew from the Rogers Cup earlier this month.

Speaking to BBC Radio 5 live, she said: "I kind of have no expectations going into the tournament.

"I think I'm playing well, so hopefully I'll win a couple of matches, but at the same time I'm also just happy to be playing.

"I haven't been able to play since San Diego and my wrist is still taped for practice, but we've done all the rehab humanly possible in the last couple of weeks to be here, so I'm looking forward to it."

Robson described the wrist problem as "one of those weird injuries where I just hit a backhand and it tore", and added: "You don't realise how much you use your non-dominant hand when you're playing, in between rallies holding the racquet.

"When I was practising and I had a brace on my right wrist, my left arm was getting so tired after about 10 shots because I'm so used to holding it with my right hand between shots."

Robson's run to the fourth round of Wimbledon in July led to her become the first British woman to be seeded at a Grand Slam since Jo Durie at the 1987 Australian Open.

"It's quite nice being seeded," said the former Wimbledon junior champion, the 30th seed following the withdrawal of third seed Maria Sharapova and retirement of Wimbledon champion Marion Bartoli.

"I think you get priority with the cars back to the hotel, and get put on the show practice courts as well, which is a lot closer to the locker rooms than the normal practice courts. I guess that's the only thing that's different.

"And I'm kind of borderline because I'm seeded 30 - so I could easily be unseeded as well."

Robson continues to work with coach Miles Maclagan after teaming up with him in June, and the pair are making changes to her game.

"I've been working a lot on mixing up my game," she said.

"I needed to improve my slice and my volleying a lot, so we've been doing a lot of that; varying pace and spins on my ground strokes as well, just so I become a bit less predictable."