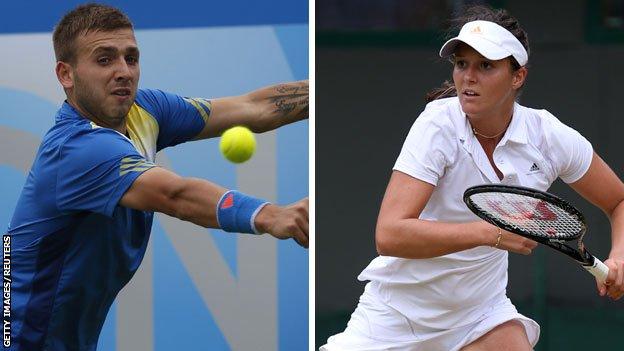 Laura Robson and Dan Evans carry British hopes on the opening day of the US Open at Flushing Meadows on Monday.

Evans, 23, will begin at the same time against 11th seed Kei Nishikori of Japan on Court 13.

Laura Robson says she has no expectations going into her first-round match - a legacy of that wrist injury which prevented her playing full points in training until Wednesday. Even though it's her non-dominant hand which is affected, it could cause problems on her double-handed backhand. She's commented on how tired the left hand can get without some support from the right.

But she seems happy with how she has performed in the training she has done, and has been working hard with her coach Miles Maclagan on improving her slice and volley. Her serve and forehand are formidable weapons, but she knows she needs to have an element of surprise. This is the first time she has been seeded at a Grand Slam, but it's an awkward start against a player only 20 places below her in the rankings.

British number one and defending champion Andy Murray expects to play his opening match on Wednesday, with Heather Watson scheduled for Tuesday.

Left-hander Robson arrived in New York having played just two matches since Wimbledon because of an injury to her right wrist and only began playing points on Wednesday.

"I'm pretty happy with how my rehab's gone and it's still going to be taped, but I'm hoping that it will turn out all right," said the teenager.

Robson is the first British woman to be seeded at a Grand Slam since Jo Durie at the 1987 Australian Open.

She avoided facing one of the leading names in the first two rounds but is well aware of the challenge posed by Dominguez Lino.

The 32-year-old Spaniard is ranked 20 places below Robson at 52 in the world but beat the Briton in Poland on clay earlier this year and on hard courts in China in 2012.

"I've lost to her twice, so hopefully it will be third time lucky," said Robson.

"She's a really tough opponent and gets a lot of balls back, so I'm definitely going to have to be on my game, step in, take the ball early and take the time away from her."

Robson made her major breakthrough by reaching the fourth round in New York last year but is playing down any pressure to repeat that performance.

"I want to do well here, but, at the same time, I'm kind of happy to be playing," she said.

"If I play well and win a couple of rounds then great, but if not I'll just go back to training in London and get ready for the Asian tournaments."

Evans came through three rounds of qualifying to reach the main draw of a Grand Slam for the first time away from Wimbledon.

His career has taken off in the last six months after years of wasting his undoubted talent because of, by his own admission, a poor attitude.

Since helping Great Britain to a remarkable Davis Cup win over Russia in April, Evans has reached the third round at Queen's Club, two Challenger finals in North America and now won three matches in New York.

"It's definitely a change in me," said Evans, ranked 179 in the world.

"I've changed a few things around in my personal life that needed to be done and it's a big weight off my shoulders just coming here with no distractions."

Evans, from Birmingham, revealed he came close to quitting the sport last year after falling out with his father.

"Certain things were annoying me and we had some heated arguments about it all," he said.

"He wasn't happy with what I was doing. It was probably the end of last year when I wasn't pulling my weight. It just shows, if you put some discipline together you can win some matches."

Nishikori will provide a major step up in class for Evans as the 23-year-old Japanese player looks to improve on his previous best of a run to the last 16 in New York five years ago.

Monday will also see the in-form Rafael Nadal begin his bid for a second US Open title against American Ryan Harrison in the third match on Arthur Ashe Stadium.