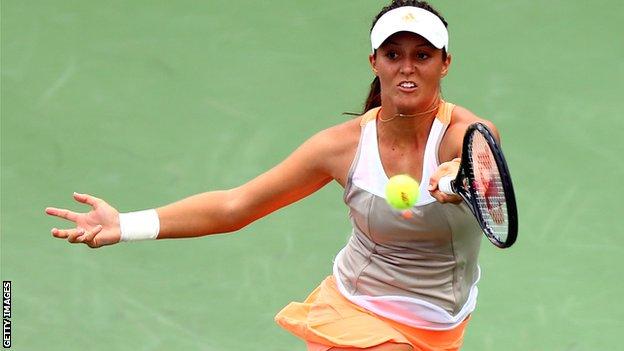 British number one Laura Robson came through a shaky opening set to beat Spain's Lourdes Dominguez Lino in round one of the US Open.

The 19-year-old Londoner reached the fourth round at Flushing Meadows last year.

"Especially in the second set, I really felt like I got a rhythm in the rallies, played very patiently, but then took my chance when the opportunity arose."

Robson had lost both her previous matches against Dominguez Lino, 13 years her senior but ranked 20 places lower at 52 in the world.

The previous record and the fact that the teenager had played just two matches since Wimbledon because of a wrist injury lent an air of uncertainty to the first-round encounter.

With most of the crowd behind her on the bowl-like Court 17, Robson - her wrist still taped - made a blistering start as she powered through the first six points on her way to an immediate break of serve.

What followed was far less convincing as the pair swapped six breaks and 11 double faults between them, with a couple of Dominguez Lino's efforts failing to even reach the net.

Her heavy topspin in blustery conditions proved enough to keep Robson's heavier firepower at bay as the Briton struggled to find a rhythm, but she failed to capitalise after earning the chance to serve out the set.

Robson levelled at 5-5 and then fought off two more break points in what proved to be a pivotal 11th game, clinching the set in the following game with a barrage of forehands.

The chance had gone for Dominguez Lino and she did not win another game as Robson made it nine in a row, breaking three times as she cantered to the finish line in one hour and 22 minutes.

"I always knew going into the match that I'd be a little bit rusty because I haven't played in a few weeks," added Robson.

"Practice points are very different to playing in the first round of a Slam. I just had to stay focused out there and confident in my game plan."

And about her wrist, Robson said: "It was OK. It's going to be taped for the next match, but nothing's changed."