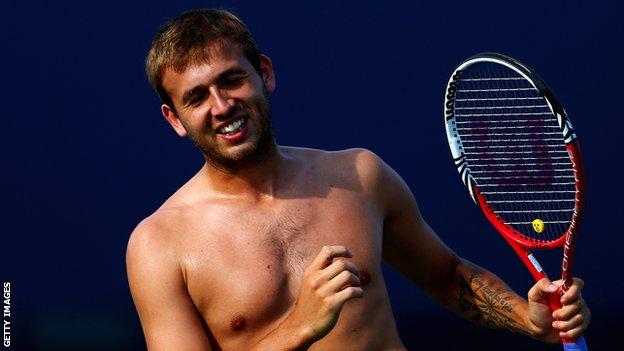 Laura Robson summed up Britain's number three with classic understatement when she said: "I think Dan is a very interesting character."

Dan Evans was the story of day one at the US Open after he brushed aside 11th seed Kei Nishikori in his first Grand Slam main draw match outside of Wimbledon.

The victory was a shock to pretty much everyone outside British tennis, not least Nishikori, who admitted he'd never seen Evans play before the match. "Not at all," he said. "I mean, I'd seen his name."

Evans made a name for himself some time ago on home turf, mostly for the wrong reasons as a poor attitude looked to be frittering away a real talent. Now he prepares to face Bernard Tomic for a place in the last 32 at Flushing Meadows.

So who is the world number 179 and how has he ended up in the second round of the US Open?

Twelve months ago, Evans was playing on the lowest rung of the professional ladder at a Futures event in Wrexham. He lost 6-0 6-2 to fellow Brit Tom Burns in the semi-finals and collected £300 and six ranking points.

"No-one was watching," Evans recalled in New York. "It's not ideal, is it? Better to be here."

He began last August ranked outside the world's top 400, but four wins at Futures level set the engines running and lift-off came with a Davis Cup tie clinching victory over Russia's Evgeny Donskoy in April.

"It was good how it worked out," said Evans. "Every match, when you win against someone who is much higher ranked, definitely gives you confidence.

"I sort of rolled on from there, you know. It's been definitely a good few months for me."

"I don't train hard enough, I don't work hard enough. I know that's the reason. It's my fault. I'm obviously pretty bad at my job."

Evans was his own harshest critic in the wake of that Davis Cup victory, but a decision to do some of his training at the LTA's National Training Centre (NTC) appears to have worked wonders.

According to his ATP profile, Evans "enjoys playing golf, pool and going to the cinema", which it is fair to say, probably doesn't tell the whole story.

He was suspended by the LTA for four months in 2008 and had his funding withdrawn for nightclubbing during Wimbledon. There were further issues across the years until his recent move to the NTC, where a security guard checks everyone is at home before lights out at 10.30pm.

He has described it as "like being 15 years old again", crucially adding: "It has been just what I needed."

Evans still has the look of a man coming round after a heavy night much of the time, blinking into the light and rubbing his eyes, but his exertions have been purely professional in recent months.

Davis Cup captain Leon Smith and coach Nick Weal have shared coaching duties over the summer, while fitness trainer Steve Kotze has had a major impact during the six-week trip to the States.

"I trained really hard with the fitness trainer," explained Evans.

"I practised hard every day, trained hard every day and I've actually reaped the rewards from that. I was pretty disciplined over this trip; I haven't been out or anything, so it's pretty good."

In the weeks that followed his Wimbledon victory, Andy Murray spent many an evening hunkered over his laptop watching Evans on obscure streams at low-key events in North America.

"I have watched some of his matches on the internet in the Challengers over the last few weeks, and he seems to be playing better tennis," said the world number three.

"He's strung it together now for a couple of months. If he can maintain that form for eight, nine months of the year, then he will get himself up and around the top 100 for sure."

Evans has clearly been motivated by such illustrious support, saying: "That's been nice. I spoke to him a little bit this week.

"It's nice that he's embracing the other Brits as well and that's only a positive thing. If he's interested it means you're doing well."

Evans has been vying with James Ward for the British number two spot in recent weeks, but there is a camaraderie with the man he calls 'Dave' that apparently extends throughout the British players.

The pair have been constant gym and practice partners in recent weeks, while the likes of Colin Fleming and Jamie Murray have been courtside for his matches in New York.

"I think British tennis a few years ago wasn't so much of a team," said Evans. "It feels like everyone wants everyone to win now and everyone speaks to everyone and supports.

"I think that's what the NTC has been trying to do, get everyone to be as one and train together and work hard together. It's been good."

And that nickname for Ward? "We all watch Only Fools and Horses and he looks like Rodney, but Trigger calls him Dave," explained Evans with a grin.

Evans played his first ATP match in 2008 and since then has racked up career earnings of £130,000, which does not go a long way if you plan to reach the top of a globetrotting sport.

"It was very difficult from time to time, but we have got a tight family unit and we all support each other and, other than being there for each other and talking, that's all we can do. Twelve months ago, he wasn't as receptive as he is now. He likes to talk to us all about tennis now, he wants the feedback and everything is done on much more of a positive note now. Moving forward he is very positive, we are very positive and for him now it's all about onwards and upwards and not looking too much into the past. He's been the most positive and most confident he's been for such a long time."

The situation came to a head last year when Evans's father David, an electrician, read him the riot act.

"It is a financial stress," admitted Evans. "Parents help you out a lot from an early age. There's times when you don't win matches and what I was doing last year was wasting money.

"He said 'you've wasted all your money' doing what I was doing, going out and stuff. I was down to not a lot left and he said he would help if I would concentrate, and obviously I'm grateful for that."

With a kick up the rear from home and some encouraging results to build on, Evans was also grateful to the LTA for putting his past indiscretions aside and backing him again.

"I've come away with a coach and a fitness trainer, so I've got them to thank," said Evans. "I wouldn't be able to pay for that. Those guys paying for that helps a lot."

Evans' career has been transformed by the last few weeks and days, to the extent that he was lined up as a hitting partner for Roger Federer and has reportedly signed to a top management agency.

He has guaranteed himself £34,000 for his efforts so far - three times what he earned in the whole of 2012 and enough to buy more than a few good nights out in his native Solihull.

"It means more to win the matches than the money," he insisted. "It's a bonus, the money, but I really want to be top 100. That's when the money will start to come in, when I'm top 100 consistently.

"I just want to play at this level instead of faffing around at Futures and Challengers. Luckily I'm out of Futures now and if I win a few matches here I might be out of Challengers.

"It would be nice to do it all in one but there's still a lot of work to be done when I get home."

The number of people who pass through the doors of the LTA at Roehampton sporting tattoos of any sort, let alone of Jesus on their arm, is probably small. "Every saint has a past. Every sinner has a future," reads one piece of Evans body art, quoting Oscar Wilde.

"He's got a Jesus tattoo," said a perplexed Robson this week. "I mean, if you've ever spoken to him, he's really not the most religious person. That doesn't make a lot of sense to me."

"I'm not sure on her hairstyle sometimes, but, hey," Evans was quick to reply.