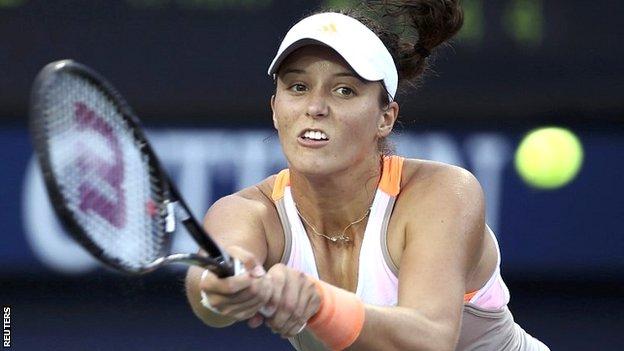 Laura Robson won a tight match against fellow 19-year-old Caroline Garcia of France to reach the third round of the US Open.

Robson faces fifth seed Li Na in a rematch of their which the teenager won.

She will go into that match in confident mood, although there remains a slight concern over the right wrist injury that kept her out of action in the build-up to New York.

Robson called a medical timeout after the first set to have the wrist re-taped and take some pain killers, but she struck the ball beautifully throughout the one hour and 35 minutes of the match.

"I just felt like I needed some more tape on my wrist, that's all we did," she said. "It's fine. I'm going to get treatment on it and get it ready for Friday."

The pair were delayed by more than four hours after rain began to fall during their first attempt at a knock-up, but the late start did not affect the quality of their serving once the match got under way.

Garcia raced through her first three service games without dropping a point and Robson was almost as dominant, failing to convert the only half-chance at 0-30 in game eight.

A tie-break looked inevitable until Robson pounced on the first sign of weakness, attacking the Garcia backhand at 5-4 and converting the first break point of the match to move ahead.

Despite the medical timeout that followed, the second set progressed in a similar vein to the first.

Robson was within sight of victory at 5-4, 30-30, but Garcia came up with two excellent serves then immediately broke Robson's serve.

Having not faced a break point all match, Robson slipped to 0-40 and sent over her first double-fault of the day, seemingly handing over the set.

She was not giving it up, however, and played a brilliant game to save two set points with some blistering forehands and force the tie-break.

Garcia took a 2-0 lead but from then on it was all Robson, who was now dictating matters with her forehand.

She stormed back with six points in a row before holding her nerve as Garcia cut the deficit, and clinched victory with a first serve.

"I thought I played really well and I served really well, and I'm looking forward to the next round," Robson told BBC Radio 5 live.

"I think she's a great player and she's had some tough matches in the past, where she should have won and nerves have got to her.

"That's kind of what I was focusing on at the end of the second set when she was serving for it - try to play aggressive and let her get a bit nervous."

Asked about her own impressive serving, Robson added: "That's what I work on in practice and that's basically how I serve in practice, so it's nice to finally have that transfer to the match court for once."