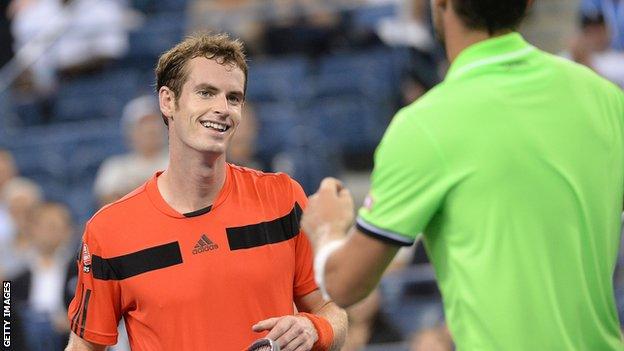 Defending champion Andy Murray reached the second round of the US Open with less than an hour of the third day remaining as he beat France's Michael Llodra in Wednesday's night session.

"Murray told us before the match that he 'wanted to play some good ball,' and he kept his word. Llodra was a very willing accomplice - his serve volley style and fabulous touch guarantee entertainment, and Murray knew he would provide a regular target to pick off at the net.

"The champion hit winners at will, offered up only five unforced errors, and the USTA got lucky with the evening weather. A 9.55pm start meant that one more cloudburst would have pushed Murray's match into day four; it was an unnecessary risk to take at a tournament not unaccustomed to weather problems in the second week."

The decision to schedule Murray among the late matches on day three had met with criticism, as it could leave him at a disadvantage compared to his leading rivals later in the tournament.

"It's nothing to do with me being defending champion, there were quite a few matches [still going on Wednesday evening]," Murray told BBC Radio 5 live.

"You obviously get less time to recover and rest, but you deal with it, do all the recovery stuff and get as much sleep as possible. Now I'm in a routine of playing every other day, which you do at all the other Slams."

Unlike Wimbledon and the Australian Open, but in common with the French Open, the men's first-round matches are spread over three days rather than two at Flushing Meadows.

"The fact that they plan on playing the first round after three days is wrong," 18-time Grand Slam champion Martina Navratilova told BBC Radio 5 live.

"We've had some women finish the first two rounds and Andy hasn't played his first-round match yet. That shouldn't happen."

Murray revealed afterwards that he had originally been asked whether he wanted to play on Tuesday or Wednesday, and chose Tuesday.

"Then we were put on Wednesday," he explained. "Again, that was fine, but it changed from Wednesday afternoon to Wednesday at night, and I don't know if that's ever happened here before, that a first-round match has been played at 10 o'clock on the third day. We were a bit surprised.

In the end, Murray just might be satisfied that he got the job done at all, as rain earlier in the day threatened to delay the first-round match until Thursday.

After doubling his Grand Slam tally at Wimbledon in July, the Scot's form had been below par in North America, and he arrived in New York nearly two weeks ago in preparation for his title defence.

It was not until 9.47pm that Murray stepped back onto the court where he won his first Grand Slam title last September, and he wasted little time once the action began.

The world number three was sharp from the outset against Llodra, producing a terrific backhand smash in a quick-fire rally at the net on his way to a 2-0 lead and breaking once again as he took the opening set in 26 minutes.

"TV scheduling plays a part but you should play the first round of the tournament and adapt it to TV. They do have that extra day on the tail end for the first time this year, but it's just not a good way to plan it - and then hope.

"It really throws off your rhythm. Some players play their first-round match on Monday and then don't play until Thursday. It's hard to get into a routine."

Llodra, a Grand Slam champion in doubles, was always likely to threaten at times on the fast surface, and the 33-year-old's serve-volley approach took him into a 3-0 lead in the second set.

Murray smiled to himself at the changeover, suggesting he was not overly worried, and he duly broke back with a cross-court forehand pass and again with a fizzing shot that dipped at Llodra's feet.

Five games in a row effectively sealed the set and such was his dominance that Murray went into the third having hit 19 winners and made only one unforced error.

A screamer of a backhand return flew past Llodra at the net to give Murray his fifth break of the night, and the helpless Frenchman even resorted, unsuccessfully, to serving underarm as he dropped serve one final time.

"It was a good start, I played well today," Murray added. "He's a very tricky opponent to play against, he's unpredictable.

"He's a fun guy to watch but he can be a bit of a nightmare to play against, so it's good that I got off to a good start, especially after waiting around all day."