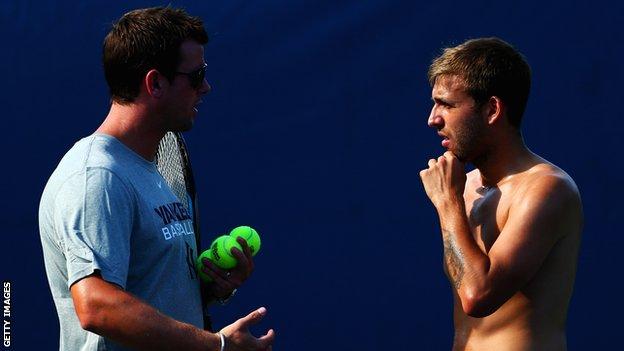 Britain's Dan Evans will try to cause another upset when he takes on Australian Bernard Tomic in round two of the US Open on Thursday.

Evans, ranked 179, came through three qualifying matches before claiming his first Grand Slam main draw win - and the best of his career - in round one.

It will be the first meeting between two talented players who have had their fair share of disciplinary problems in the past.

However, Evans insisted that his win over Nishikori was not the limit of his ambitions.

"I'm happy with how the day went and how the match went, but I really want to win the second round," he said.

"One round isn't enough at the minute, so I want to win again on Thursday."

The Briton has been racking up the wins since heading to North America last month, reaching the finals at two Challenger events before coming through three rounds of qualifying and beating Nishikori in New York.

"I've played some good matches for the last five weeks," said Evans. "I really want to go far in the tournament, win a few more matches, and I'm ready to play again."

Tomic, 20, has spent much of the summer answering questions about his father John, who has been accused of assaulting his son's hitting partner in Madrid - something he denies.

"I'm not looking where my dad is," Tomic said after his five-set win over Albert Ramos in round one.

"Of course my dad is still on my side with me and that's an important thing, but, you know, I'm trying to find myself deep down inside and become the best player I can be."

With just one win since Wimbledon, Tomic must see facing a qualifier in round two of the US Open as a real opportunity, but he has been impressed by Evans's progress.

"I was very surprised because I practised with Kei early on in Bradenton and he was playing very, very good in practice," said Tomic.

"I thought Kei was going to win that match. It shows you how anyone can play, and all these players that are playing here, they're good.

"You can't take anyone for granted these days, because it proves that a guy that's 150 can play on this day and beat a guy almost top 10.

"But for him to win against Kei was huge. I'm sure if he's playing against Kei way against me it's going to be very difficult for me, that's for sure."

Defending champion Serena Williams will play Galina Voskoboeva in the second match on Arthur Ashe Stadium after their contest was postponed on Wednesday because of rain.