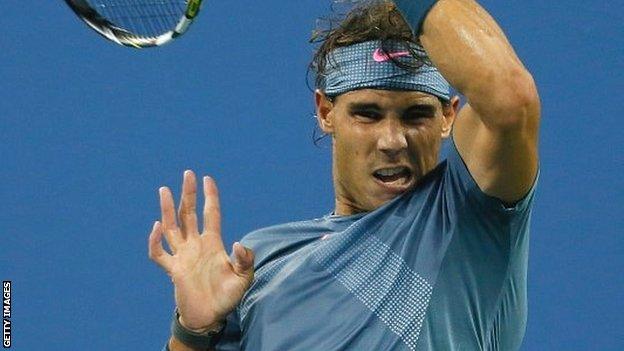 Rafael Nadal's irrepressible form continued as he thrashed Brazilian qualifier Rogerio Dutra Silva to move into round three of the US Open.

But fourth seed Sara Errani was eliminated by Flavia Pennetta.

Fourth seed Errani admitted she felt so weighed down by pressure that she did not want to go on the court before losing to her compatriot.

Maria Sharapova's withdrawal meant the 26-year-old was elevated to fourth seed and she struggled to cope with it.

The 16-time Grand Slam champion needed just 69 minutes to book a third-round meeting with Yaroslava Shvedova, of Kazakhstan, and has now lost only four games in two matches.

"It might take a few matches and next thing you know you're playing really, really good tennis again and you're close to playing some really great tennis," said Federer, who is at his lowest world ranking - seventh - since 2002.

"I think that's kind of where I am right now, and that's where every match is really important to me and how I play every single point."

Nadal showed no sign of the injuries that have plagued him over the past two years and later said: "I'm trying to play more aggressive.

"I didn't have time to practise a lot because I was injured for seven months and when I started to feel better I started to compete. I need to play more aggressive - I'm trying to work on this my whole career but it's more mental than a training thing."

Bouchard, 19, has been tipped as a future star, but Kerber battled through and remains on course for a quarter-final meeting with Serena Williams.

His pre-tournament form was unimpressive, but Ferrer has now made it to round three or better at each of the last 15 Grand Slams.

Azarenka, who at the recent Cincinnati Open, was broken three times on a windy day - but she prevailed in a little over an hour to book a meeting with Alize Cornet of France.

Number 13 seed Isner held off Monfils to progress as the last-seeded American in the men's draw, despite the Frenchman getting more than his share of support in front of Isner's home crowd.

Mannarino is through to round three of a Grand Slam for only the second time, and his reward is a meeting with Roger Federer.

Querrey's first defeat before round three at Flushing Meadows since 2007 means the highest-ranked US man left in the draw is 13th seed Isner.

Britain's Murray and his Australian partner Peers will continue their doubles bid against Feliciano Lopez and Andre Sa after an impressive 81-minute victory over ninth seeds Verdasco and Marrero.

The 31-year-old former world number five looked hugely impressive as he knocked out Dancevic to set up a meeting with Britain's Dan Evans.