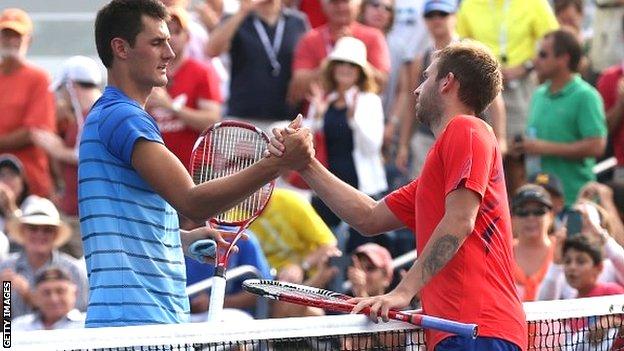 British number three Dan Evans extended his superb run at the US Open with a four-set victory over Australia's Bernard Tomic in the second round.

The 23-year-old qualifier from Birmingham had already broken new ground by reaching the second round of a Grand Slam for the first time, having Kei Nishikori in his opening match.

It took Evans a while to work out how to respond to Tomic's perplexingly passive approach, and his attacking philosophy paid dividends. He will always make his fair share of unforced errors, but has the ability to win points from both the baseline and the net.

A fourth-round meeting with Roger Federer is a tantalising prospect, but Evans' next opponent will take a lot of wearing down first. Tommy Robredo recovered from two-sets-to-love down three times in a row at this year's French Open.

And while Tomic is ranked lower than the Japanese player at 52 in the world, the 20-year-old Australian is another major scalp for Evans.

"It was pleasing I could find some belief inside and come back and find my game, because it wasn't there," said Evans.

"I looked at the clock, I think it was 34 minutes, I was a set and a break down. It was looking like the airport for me. So, yeah, it was good."

On a sun-baked Court 17 at Flushing Meadows, the Briton won the battle of two talented players often undone by poor discipline.

Evans has been a reaching two Challenger finals in North America before coming through four matches in New York to set up a meeting with Tomic.

The occasion looked to have got to Evans in the early stages and successive double faults led to him dropping serve for the first time as the first set slipped by in just 22 minutes.

A swift afternoon looked in prospect when the Briton slipped an early break down in the second set, but he responded straight away with a thumping smash and began to assume control.

Tomic might be eight inches taller than Evans at 6ft 5in but his counter-attacking style meant he was on the defensive against an increasingly confident opponent.

A sharp backhand volley took Evans into a 4-2 lead and, although he then dropped serve, the Briton regained the advantage with a sublime backhand smash down the line.

Evans had missed match points on his recent and closing out the set proved to be a tense affair, but he clinched it at the fourth attempt to level the scores.

Breaks were swapped at the start of the third and it would come down to a tie-break - and again it was Evans who was able to produce the burst of winners that made the difference.

A backhand volley and two forehand winners took him 5-2 ahead, and he thumped a forehand down the line on his second set point to move in front for the first time in the match.

With everything going his way on court, the only sign of discomfort from Evans came when he needed his nipples taped at the start of set four.

Never short of confidence, that potential embarrassment was probably not to blame for him dropping serve in the next game with a poor volley, and once again he hit straight back by lobbing Tomic.

The Australian cut an increasingly listless figure, netting a tame forehand to give up the key break at 3-1, and Evans hammered down two aces in the final game as he powered home in two hours and 20 minutes.

"I played well today, but I missed quite a lot," added Evans. "I didn't serve great I don't think. I served pretty decent at times when I needed to.

"In the last match, I was really clinical. I could have been a bit more clinical today. That may be a bit harsh - I just won against Tomic."