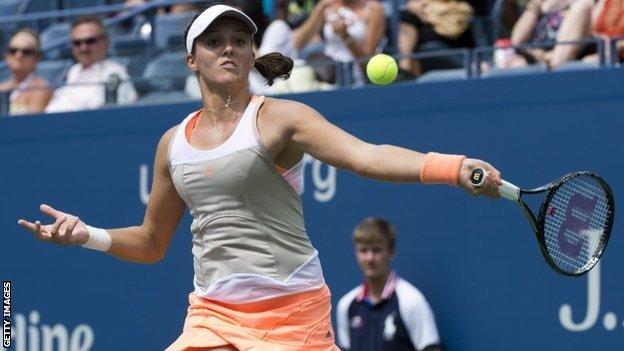 Robson, 19, was beaten 6-2 7-5 in the opening match of day five in a sparsely populated Arthur Ashe Stadium.

And after Robson produced a clinical performance against Caroline Garcia in the previous round, Li's greater quality played a big part in the Briton's final tally of 30 errors and just seven winners.

The US Open is the first Grand Slam tournament in which Robson has been seeded, and at 30th in the list she had reached her expected position by making the third round.

"We have seen two excellent performances from Laura in this tournament and I don't think she had much say in that match because Li Na was exceptionally good.

"It was encouraging to see Laura moving well and she has a good autumn to look forward too."

However, her win over Li at the same stage last year - which she described this week as the best of her career at the time - showed she was capable of producing an upset.

Li, 31, was too sharp from the outset, though, not allowing Robson to settle on serve and firing down 11 aces to none.

Robson, who came into the tournament still struggling with a wrist injury, told BBC Radio 5 live: "I'm still very disappointed about today. I could have played a lot better.

"Overall I would say it was an average week and I definitely was looking to do better."

The early shouts of "Come on Laura!" that echoed around the vast arena quickly took on a pleading tone as Robson fell 5-1 behind, with her forehand offering up a string of errors.

Li closed out the set after 29 minutes but gifted Robson a way back into the match early in the second set as two double faults in a row saw her drop serve for the first time.

Robson's lead did not last long - a badly misjudged volley at the start of game five set her off on the wrong track and, although she managed to see off two break-back points, Li's punishing groundstrokes converted the third opportunity.

The next five games went with serve but the closer the end of the set loomed, the more precarious Robson's position became, and Li pounced when the chance came at 5-5 with another stinging return.

Her first match point went begging with a wayward forehand, but the former French Open champion, who now shares an agent with Robson, finished off the teenager with a second serve ace.

Li goes on to face Serbian ninth-seed Jelena Jankovic or Japanese qualifier Kurumi Nara in the fourth round.

Robson will now turn her attention to fully recuperating from a recent wrist injury before heading to China next month for the start of the 'Asian swing' of tournaments.

"I didn't have a very good start and she came out firing and didn't give me a lot to go on in the rallies," Robson said.

"It was a tough match for me to get into but I thought she played really, really well, very solid on the serve and return, so it was a tough one."

Robson will now turn her attention to recuperating fully from the wrist injury before heading to China next month for the start of the 'Asian swing' of tournaments.

"I'll rest it a little bit, let it heal completely, and then do some good training before Asia," she said.

The plan is to return in Guangzhou, China, in the middle of next month, although before then Robson also faces the prospect of a trip to the dentist as she needs to have at least one of her wisdom teeth removed.

"There have been a couple of horror stories. A few of the girls have been trying to scare me a little bit but it's not working," she said.