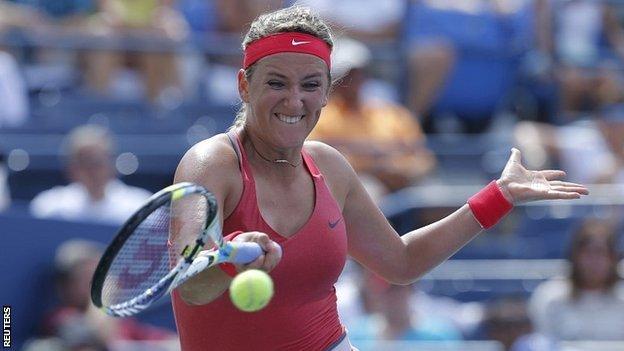 Second seed Victoria Azarenka fought back from a set down to overcome French 26th seed Alize Cornet and reach the fourth round of the US Open.

In the men's draw, Spanish second seed Rafael Nadal made straightforward progress into the second week as he defeated Ivan Dodig 6-4 6-3 6-3.

Azarenka, last year's runner-up at Flushing Meadows, will now face Ana Ivanovic for a place in the last eight after the Serbian beat Christina McHale of the United States 4-6 7-5 6-4.

Former world number one Ivanovic survived a major scare to reach the fourth round.

Her opponent, McHale of the United States, was serving for the match at 5-4 in the second set but the 2008 French Open champion broke back and claimed victory.

Nadal struck 37 winners to his opponent's 19 as he remained on course for a possible quarter-final meeting with Roger Federer.

Former world number one Wozniacki suffered her fourth loss of the season to a player ranked outside the top 100 as qualifier Giorgi advanced to the last 16.

Giorgi reached the same stage at Wimbledon earlier this year, but had not played a match between the two Grand Slams as she recovered from a shoulder injury.

She will play fellow Italian Roberta Vinci in the fourth round after the tenth seed beat Karin Knapp 6-4 6-3.

World number seven Federer, ranked lower than he has been since October 2002, wrapped up victory in one hour and 21 minutes.

The Swiss lost only 11 points in the second set and will play Spain's Tommy Robredo, who he has beaten in their 10 previous meetings, in the next round.

Halep, who won her fourth title in the past three months last week at New Haven, took just 51 minutes to reach the fourth round of a Grand Slam for the first time.

"I'm really happy that I played so well," Halep said. "It was incredible. I played my best match ever.

"It's an incredible period for me. I'm more confident and more aggressive on court. I want to take the pleasure from every moment."

Azarenka said she had a lot to work on after being to made to battle for her third-round victory over Cornet, who saved 10 break points on the way to winning the first set.

"I couldn't keep my rhythm early in the match," said Azarenka. "I tried to keep my head down, stay calm and keep playing aggressive.

"I was too passive with my feet early in the match. For sure I'm going to work on that in practice."

Azarenka beat US Open defending champion and world number one Serena Williams in the final of the Cincinnati Open in her preparations for Flushing Meadows.

Wildcard Tim Smyczek is the only remaining American in the men's singles draw after John Isner was defeated in two hours 42 minutes in front of a partisan crowd.

If Smyczek loses to Marcel Granollers on Sunday, there will be no Americans in the men's singles last 16 for the first time in US Open history.

David Ferrer was the first man through to week two after defeating Kazakhstan's qualifier Kukushkin.

The fourth seed dropped a set for the second match in a row, but was otherwise largely untroubled.

"I tried to play, tried to fight. But my body wouldn't let me fight," said Kvitova.

Svetlana Kuznetsova, who won the title in 2004 and finished as runner-up in 2007, was beaten in straight sets by Flavia Pennetta, who has now made the last 16 of successive Grand Slams for the first time in her career.

Alison Riske, 23, has been discussing her main source of emotional support as she reaches the second week of a Grand Slam for the first time.

"The blankie story is out. I can't deny it now. It's getting smaller by the week. It can fit in the palm of my hand. My siblings always used to hide it. It used to make me so mad. It's been there since the second I was born. It's been around the world. Originally it started out like forest green and now it's like mint green. I don't know if it's a colour now."

Caroline Wozniacki looks back at where it all went wrong in defeat to Camila Giorgi: "I had many break-point opportunities in the second I didn't take, and all of a sudden she came into the rhythm and just started hitting everything and it was starting to go in."

Rafael Nadal aims to improve still further on his excellent form. "To be able to win against him [Dodig] in straight sets is great news. I played better today than in the previous matches. Always a positive thing. Tomorrow I have another day for practise and to be better for the match of Monday. So that's all."

"I don't know who was it, but one guy was, really between first and second serve, always saying, 'Come on' and 'Let's go John', like really aggressive during my motion," said Philipp Kohlschreiber of one of the spectators on his match against American John Isner. "I turned around and said to him, 'Well, I don't think that's a nice thing what you do'."

John Isner responded: "I didn't notice that. I don't know what was said or who said it, but, you know, if it affected Philipp in any way, I apologise. I haven't seen that too much. I didn't even see it today, actually."