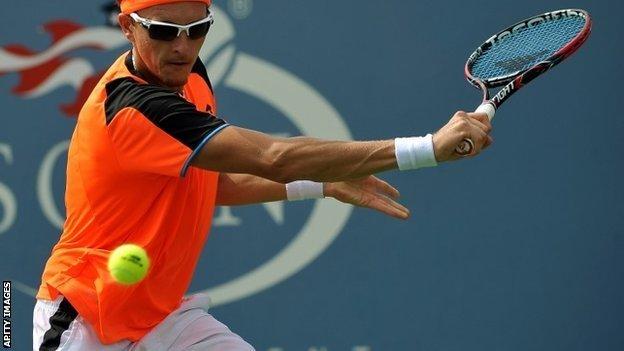 Uzbekistan's Denis Istomin will rely on his mother's coaching advice when he plays 2012 champion Andy Murray in the fourth round of the US Open on Tuesday.

The pair will meet for the second time after Murray won their meeting en route to the Brisbane title in January.

Their match will take place at about 02:00 BST (Wednesday) after Serena Williams plays Carla Suarez Navarro.

Istomin is one of very few players on the men's tour to have a female coach, far less their mother.

"She's tried to always do right for me," said Istomin, ranked 65th in the world.

"When I started playing she was playing a little in national tournaments, so she knows tennis better than me for sure."

The 26-year-old, who lives in Moscow, is among a small group that includes Donald Young and Marat Safin in recent years to be coached by their mothers.

"We have a good relationship and we understand each other very well," Istomin added.

"She always tries to help me in everything, not just tennis but normal life as well, and gives me a lot of good words. I'm happy to be coached by my mum.

"Sometimes she shouts at me. I try to say my way, 'I can't hit the ball like this,' but she says, 'Do it like this, just listen to me.' She's normally right.

"It's tough for the other players to travel with female coaches, it's really difficult. Even going to the locker room before the match when they have to talk, they cannot do it.

"I always go outside to talk with mum before the match, so it's tough for me as well. But she's my mum. Not many players have a coach like mum or father. Some, but not many."

Murray was introduced to the sport by his mother, Judy, the current Great Britain Fed Cup captain.

"There's not loads of people that get coached by their parents," said the world number three.

He's a good player. He hits the ball very flat. He had a very good match with Novak [Djokovic] in Montreal. He's had some good wins this week, as well.

"A lot of them do from a young age, but not so much when they're on the tour. Obviously it works for him."

Istomin has only reached the fourth round of a Grand Slam once before, losing to Mikhail Youzhny at Wimbledon last year, but he has experienced facing Rafael Nadal on Arthur Ashe Stadium in 2010, putting up a good fight despite a three-set loss.

"Technically he's very sound," said Murray. "He's a good player. He hits the ball very flat. He had a very good match with Novak [Djokovic] in Montreal. He's had some good wins this week, as well."

Istomin is in little doubt over where Murray's strengths lie, saying: "He's a great returner, he returns almost everything. My key is my serve, so I will try to serve better than usual.

"He's moving on the court incredibly so I will try to move him more and try to beat him."

Murray has dropped one set in his opening three matches in New York and has largely stayed out of the headlines as the drama has occurred elsewhere.

"I haven't really noticed any of the years thinking that I'm front-page news," he said. "It's very different to Wimbledon, obviously, for me.

"In some ways it's nice, but I don't really think it makes a whole lot of difference to how I play.

"I've played some of my best tennis at Wimbledon over the last five, six years. It's more the build-up to the tournament that I've always said is hard. Once the tournament gets started, it's a bit easier."