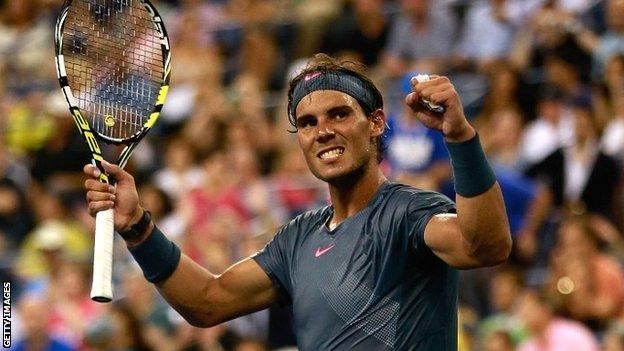 Rafael Nadal avoided following Roger Federer out of the US Open as he fought back from a set down to beat Philipp Kohlschreiber and reach the last eight.

In a match interrupted by rain, 30-year-old Daniela Hantuchova hit 15 aces as she saw off the 81st-ranked American to reach her first Grand Slam quarter-final since 2008.

Nadal had to work hard for his victory but moves into the quarter-finals having yet to drop his serve in four matches.

Simona Halep has won more tournaments than anyone bar Serena Williams this year with four titles, but the 31-year-old Flavia Pennetta stopped the Romanian in her tracks to make a fourth US Open quarter-final.

Roberta Vinci was the only player to secure a win before the four-hour rain delay, and said: "I'm happy of course. Now I have a lot of time to rest and to play the doubles. Of course I was lucky."

The relentless Ferrer saved three set points in the crucial third set and went on to join Federer, Nadal, Novak Djokovic, Andy Murray and Ivan Lendl as the only players in the Open era to reach all four Grand Slam quarter-finals in back-to-back years.

Richard Gasquet saved a match point and survived a barrage of 39 aces and 102 winners to finally overhaul Canada's Milos Raonic in four hours and 40 minutes.

It is just the second time that the 27-year-old has made it to a Grand Slam quarter-final. His only other success in 16 previous Grand Slam fourth-round matches came against Jo-Wilfried Tsonga at Wimbledon in 2007.

Inglot and Treat Huey made the quarter-finals with a stunning win over the third seeds on Court 11. After a tight first 12 games, the 16th seeds raced through the tie-break and took the second set in just 27 minutes. The pair hit 41 winners to the Spaniards' 21.