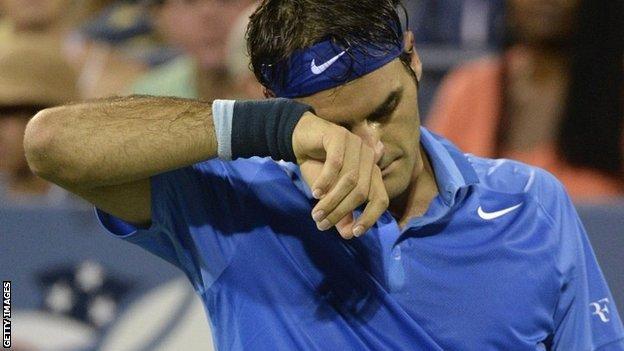 Roger Federer's hopes of winning a sixth US Open title ended with a shock fourth-round defeat by Spain's Tommy Robredo in New York.

Federer converted just two of 16 break points and made 43 unforced errors - 20 on his favoured forehand side - as he lost in two hours and 24 minutes.

Roger is the best player of all times. To beat him in a huge stadium like the US Open and in a Grand Slam, a match of five sets, it's like a dream

It means a much-anticipated first meeting between Federer and Rafael Nadal at Flushing Meadows will not happen as Robredo progresses to the quarter-finals.

"I kind of feel like I beat myself, without taking any credit away from Tommy," said Federer.

"I kind of self destructed, which is very disappointing, especially on a quicker court. Your serve helps you out. You're going to make the difference somewhere. I just couldn't do it. It was a frustrating performance today."

It is the first year that Federer has failed to reach a Grand Slam final since 2002, but he remains determined to regain the form that made him world number one as recently as last year.

"I've definitely got to go back to work and come back stronger, get rid of this loss now as quick as I can, forget about it, because that's not how I want to play from here on," he said.

"I want to play better. I know I can. I showed it the last few weeks, that there is that level, so today was pretty frustrating."

A rain delay of more than four hours meant the last-16 match was moved to the second show court, and a huge queue formed outside the stadium when news broke that the 17-time Grand Slam champion would be heading there for the first time since 2006.

Federer has struggled with his form and a back problem for much of the year but his early performances in New York had suggested he might be ready to challenge once again.

Robredo, 31, had been taken to four punishing sets by Britain's Dan Evans in the previous round, and a 0-10 head-to-head record against Federer did not exactly instil confidence.

However, the Spaniard twice led by a break in the opening set and, after failing to serve it out, raised the prospect of an upset by dominating the tie-break.

A woeful Federer service game that included three forehand errors gave up the break at 4-3 in the second set, and two more break points went begging as Robredo served it out, thanks in part to one spectacular forehand winner.

The comeback simply would not come in the third set as Federer failed to convert six more break points, and was once again broken to love at 3-3.

Robredo had won just three sets in their 10 previous matches but held his nerve to serve out the match, and condemn Federer to his earliest US Open exit in 10 years.

The Swiss played down the late change of venue, saying he had practised on Armstrong during the week.

"That should not be the issue," he said. "I've waited for so many matches throughout my career. That's definitely the last excuse you could find."

Robredo said: "It's amazing. For me, Roger for the moment is the best player of all times. And to beat him in a huge stadium like the US Open and in a Grand Slam, a match of five sets, it's like a dream."