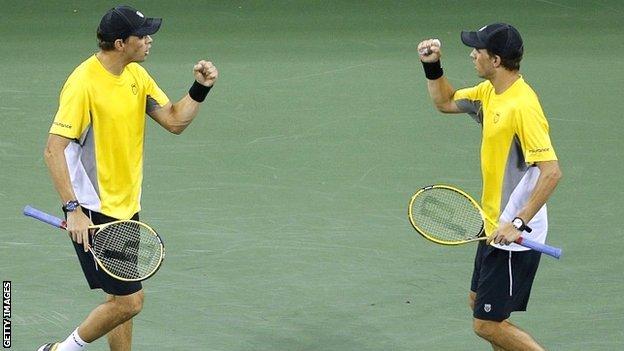 Colin Fleming and Jonny Marray could not convert some early chances as they lost their US Open doubles quarter-final to top seeds Bob and Mike Bryan.

The Americans won 7-6 (9-7) 6-4 on Arthur Ashe Stadium to keep alive their hopes of winning a calendar Grand Slam.

British duo Fleming and Marray had two set points in the opening tie-break but the Bryans saved them both, the first in a spectacular 21-shot rally.

The Bryans broke at 3-3 in set two to take control as they won in 97 minutes.

"Were obviously disappointed," said Marray. "I thought we played a good match and had chances. They're so good at snuffing them out and they make you play that one extra ball.

"That's why they've won so many tournaments. But I think we can take a lot of positives from the week."

The Bryan brothers had just too much for Fleming and Marray, although Scotsman Fleming missed a chance with a forehand volley on break point at 5-5.

England's Marray had earlier saved two set points on serve, and Fleming saw off another three in game 12 to force the tie-break.

The British duo earned their first set point at 6-5 but a terrific rally at the net went the Bryans' way, and a good return saw off the second before Marray sent a return long to finally give up the set.

One break proved enough in the second set as the brothers converted their third match point and followed it with a trademark chest bump at 00:33 local time.

Fleming added: "I'm absolutely gutted. I think it was a really high-level match. I'm really proud of the way we played.

"I don't think anyone could have argued with us winning the first set. I missed a really easy volley to break at 5-5 - it's going to be tough to sleep without thinking about that.

"Once we get over the defeat it's a great memory, playing out there in such an amazing match, but it's tough at the moment."

Britain still has representatives in the last eight of the men's doubles with Jamie Murray and Australian John Peers, as well as Dom Inglot and Treat Huey of the Philippines.