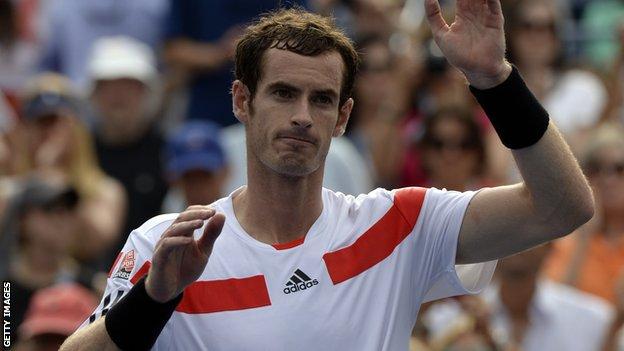 Andy Murray has been named in Great Britain's Davis Cup team for the World Group play-off with Croatia.

The world number three is joined in the four-man squad by Dan Evans, James Ward and Colin Fleming.

Murray missed the last tie in April, when Evans, Ward, Fleming and Jonny Marray secured a shock win over Russia.

The last time Britain played on clay was in 2008, when Jamie Baker and Alex Bogdanovic played singles in a 4-1 defeat in Argentina. Their previous clay tie was in Ukraine in 2006, with Andy Murray earning two points and Greg Rusedski the other in a 3-2 win.

The tie takes place from 13-15 September on clay, in Umag, with the winning nation qualifying for the elite World Group.

The last time Britain took part at that level was 2008.

Evans, who reached the third round of the US Open before he was beaten by Tommy Robredo, will hope his recent form is enough to earn him the second singles spot ahead of Ward.

A second doubles player may still travel to Croatia, but that decision will be taken following the US Open.

Davis Cup captain Leon Smith said: "Croatia are former winners of the Davis Cup and currently ranked number 11 in the world, but as we proved in Coventry back in April, we can upset the odds.

"The recent success of our players has inspired more people into our sport and this is another great opportunity to do just that."

Britain and Croatia have only played each other once in the competition, with Britain winning 4-1 at Wimbledon in a 2007 World Group play-off.