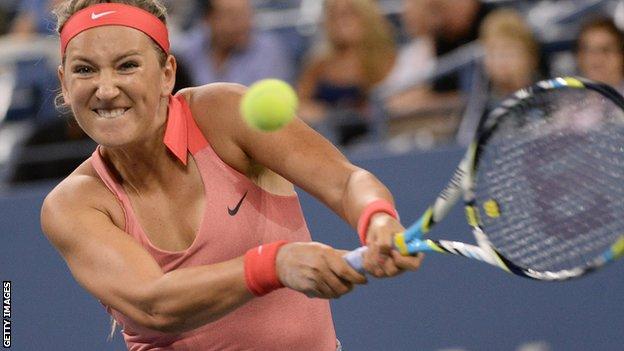 Second seed Victoria Azarenka remains on course for a return to the US Open final after beating Daniela Hantuchova in the last eight at Flushing Meadows.

The 2012 runner-up needed only an hour and 16 minutes to win 6-2 6-3 and set up a semi-final meeting with Italy's Flavia Pennetta.

Pennetta followed up her second-round win over fourth seed Sara Errani by knocking out another fellow seeded Italian in 30-year-old Vinci, and did it in some style.

Ranked down at 83 after struggling with back and wrist injuries last year, the former doubles world number one has beaten Maria Sharapova and Vera Zvonareva at Flushing Meadows in previous years.

"It's amazing, I'm really happy and I cannot believe it," said Pennetta. "It was really tough to play against Roberta. It's not easy to play with one of your best friends on the tour. I think this is the first week where I feel better [after wrist surgery]. I feel myself and maybe a little bit of a better player as well."

From the moment Richard Gasquet dropped serve at the start of the third set against David Ferrer, there was a sense of inevitability around Arthur Ashe Stadium.

The Frenchman has appeared as fragile as he is talented over the years, and despite the flow of beautiful backhand winners (21 in total) it was the Spaniard who was now winning the key points.

When it came to a fifth set, Gasquet's 6-12 record in deciders did not match up too well against Ferrer's 19-9 form. And yet it was the 27-year-old from Beziers who proved the stronger, with Ferrer giving up his serve by double-faulting and Gasquet closing out with two impressive service games.

Whatever happens in the semi-final, Gasquet has laid a few ghosts.

Gasquet won back-to-back five-set matches for the first time in his career, following up his fourth-round victory over Milos Raonic with an even more impressive effort against the tireless Ferrer.

He moves on to a Grand Slam semi-final for only the second time in his career, and six years after he lost to Roger Federer at the same stage at Wimbledon.

"It was a big match for me," said Gasquet. "I started very well and I thought he was a little bit nervous with the wind, but he is a big fighter.

"I think I have experience of five sets, I played them a lot in my life, and I knew I had to serve well in the fifth. It's a big match for me, a big, big victory. It means a lot. I'm 27, the last time I did it I was 21. I practised hard for it, it's wonderful for me."

Azarenka had looked below her best in the opening four rounds and began nervously once again, but got the better of three early breaks on her way to taking the first set.

The second set suggested the two-time Australian Open champion was still some way off top form as she slipped 2-0 behind, and then failed to serve out the match after a run of five straight games.

Hantuchova simply could not protect her serve, however, and Azarenka clinched victory with her seventh break of the night.

At 24 years old, she will be the only one of the four semi-finalists not in her 30s.

"It's amazing to see such great players in the semi-finals," said Azarenka. "Flavia has been through so much in her career and I can't wait to play her."

Rafael Nadal destroyed fellow Spaniard Tommy Robredo for the loss of just four games as he powered into the semi-finals.

The 2010 champion, seeded second, won 6-0 6-2 6-2 on Arthur Ashe Stadium against the man who had knocked out Roger Federer in the previous round.

Nadal, 27, said of his performance: "I'm happy. I think I played my best match of the US Open. I'm playing a little bit better every day and it's a great year.

"I'm very happy to be in the semi-finals. I want to enjoy every moment."

Britain's last hope in the men's doubles departed as Inglot and partner Huey lost a tight first set on the Louis Armstrong Stadium, and then failed to complete a comeback from 5-1 down in the second.

Colin Fleming and Jonny Marray went out at the same quarter-final stage on Monday, before Jamie Murray and Australian John Peers followed on Tuesday.

Rafael Nadal might be in stunning form, but he is not about to look past Richard Gasquet in the semi-finals. "Do you think Djokovic will be in the final?" he asks. "I don't know if I will be, so I hope to be ready to play a good match against Richard. If I don't play great match against Richard, I will see the final on TV."

"I don't know the way he felt, but obviously I felt that he was doing pretty good out there." Tommy Robredo got a first-hand view of just how well Nadal is playing as he only took four games off the 2010 champion.

"I beat him one time in my life when I was 13." Richard Gasquet admits the prospect of facing Rafael Nadal in the semi-finals is a little daunting as he has a 0-10 professional record against the Spaniard.

Victoria Azarenka says she has found it hard to get a look at how Serena Williams has been playing. "Sometimes I watch, but I don't really watch a lot of TV. Plus, she played too quick all the matches."

Sixteen-year-old junior Borna Coric could theoretically face Andy Murray in the Davis Cup next week after being called up to the Croatian squad for the first time. "No, I don't think I can win," he says. "Only if he injures himself! But it would be a huge experience."