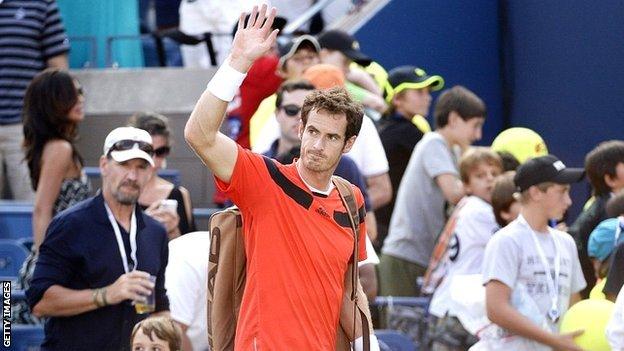 Wimbledon champion Andy Murray needs to set himself new challenges after losing his US Open title with defeat in the quarter-finals, says Boris Becker.

The Briton, who won his first major title at Flushing Meadows last year,

"There are a few major ones but right now step away for a little bit and be crystal clear about what he wants to do for the rest of the year.

"A quarter-final is a respectable result at the US Open, although obviously the match on Thursday wasn't, but I'm sure he's going to come back."

Murray, who won and the in 2012, admitted after Thursday's defeat that it had not been easy to adjust after becoming

Murray pours his heart and soul into every Grand Slam, and it has reaped handsome dividends, so he's unlikely to change tack too much - even if his results in the Masters Series events are surprisingly erratic for a player of such outstanding ability.

"When you work hard for something for a lot of years, it's going to take a bit of time to really fire yourself up and get yourself training 110%," said the Scot.

Becker followed up victory at Wimbledon in 1989 with his only US Open title two months later, and it was the only time in his career that he won back-to-back Grand Slams.

"If it was so easy, you would do it every week," said the German.

"Andy's certainly had a few very emotional highs over the past 18 months, and it's not easy to digest that, and to come to terms with that and find new motivation and inspiration, and that's what coming across.

"He's doing everything he's supposed to do but the extra 10% is missing."

Murray will play for Great Britain against Croatia in the Davis Cup next week, with his next tournament scheduled to be the Thailand Open in Bangkok from 23 September.