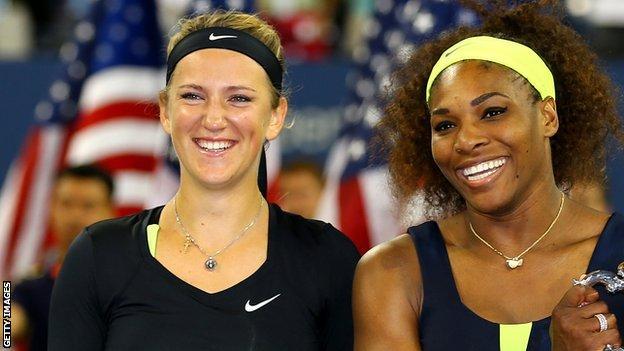 Victoria Azarenka believes she will be facing the best player in history when she takes on Serena Williams in Sunday's US Open final.

The Belarusian served for the title against Williams 12 months ago, but the American fought back to win for the fourth time at Flushing Meadows.

Williams, 31, has looked imperious in reaching this year's final for the loss of just 16 games in six matches.

"She's an amazing player. She's the greatest of all time," said Azarenka.

Azarenka won their last contest in Cincinnati on the eve of the US Open but Williams, who has won 12 of their 15 matches overall, believes the second seed raises her game when they play.

"Both matches [won by Azarenka in 2013] she played really well," said Williams.

"I let myself down at opportunities and I didn't take them. If I'm able to get another chance I have to take them, because she is always pumped and she does really well.

"It's hard to go against Serena. She is so comfortable when she gets to a final. For her it's always been about trying to win Grand Slams and she, as great as her year has been, is not happy with just having the one in 2013 [French Open].

"Serena is so comfortable playing here in New York. The crowd is going to be behind her and I'd be surprised if she didn't take home the title."

"When she plays me she plays her best, by far. I have seen her play other players, but when I play her I'm playing a totally different player. Obviously she brings her best game."

Both women have won one Grand Slam apiece this year, and although French Open champion Williams is firmly established as the world number one, whoever wins on Sunday might feel they have had the better year.

A victory would also take Williams to within one major singles title of the 18 won by Martina Navratilova and Chris Evert.

"It's still so close but it's still so far," said Williams. "I have to win against a great player and I have to play great tennis."

For Azarenka, it is an opportunity to win a Grand Slam title away from the Australian Open, where she has been the champion for the past two years.

"It's an amazing opportunity, something that every tennis player dreams of, to be in the final of the US Open and play against the best player in the world," she said.

"It's something I'm so excited about. I can't wait to go out and play."