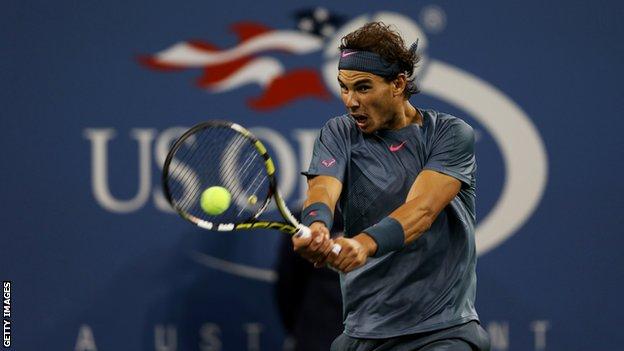 Rafael Nadal played the best tennis of his career as he won a second US Open and 13th Grand Slam title in New York on Monday, according to John McEnroe.

"To me he's better than ever," said seven-time Grand Slam winner McEnroe.

"He's moving better; it was amazing to see how much he wanted it. His will to win... I've never seen anyone like it."

The Spaniard was out for seven months through injury but since coming back in February, he has won 10 titles, including Grand Slams at the French and US Opens, and gone unbeaten in 22 hard-court matches.

"It's amazing because he was watching on TV [last year]," McEnroe, a four-time US Open champion, told BBC Radio 5 live.

"We were worried about his career, then he doesn't play Australia, and all of a sudden he comes back. For a while, we're still thinking is he going to be able to come all the way back?

"He wins the French, but that's expected in a way, but he looked like his old self. When he lost first round of Wimbledon, I started worrying again. I thought the knee was bothering him, but he comes back and wins both hard-court events [Montreal and Cincinnati]."

Nadal has moved to within one of Pete Sampras in the all-time list of male Grand Slam singles winners and four behind leader Roger Federer's mark of 17.

"I think if he stays healthy he can easily win four or five more, no doubt about it," said McEnroe.

"Let's hope that he stays healthy because it would be great for our sport - and somebody's going to have to step up!"

Former British number one John Lloyd believes Nadal's recovery from injury and subsequent form makes his year the greatest in the history of tennis for any player.

"Even if Nadal loses a few matches towards the end of the year in some of the Masters series events, it does not matter," he told 5 live.

Lloyd added: "I feel Roger Federer is going to be caught. As long as Rafa's injuries hold out I think he will break the record."

Former Wimbledon champion Pat Cash agreed that Nadal was now a serious threat to Federer at the top of the Grand Slam standings.

"Nadal could surpass Federer's total of 17," the Australian said.

"That debate over who is the greatest is fun but pointless, but you can't argue with eight French Opens and maybe more to come.

"The only thing holding him back is his knees. It's a much healthier tennis circuit with him back in it."