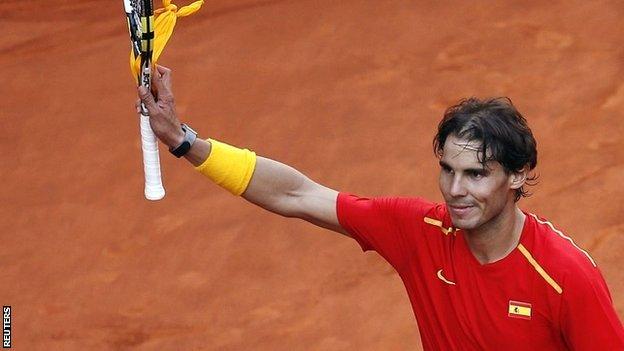 US Open champion Rafael Nadal continued his fine form as he crushed Sergiy Stakhovsky 6-0 6-0 6-4 to give Spain a 2-0 lead over Ukraine in their Davis Cup World Group play-off.

"I am here to try to help the team," said Nadal, who is also set to play in Saturday's doubles.

The Czech Republic lead Argentina 2-0 in the other semi-final after victories for Radek Stepanek and Tomas Berdych over Juan Monaco and Leonardo Mayer respectively.

Spain, champions three times in the past five years, must win their tie to remain in the elite World Group and avoid dropping into one of the regional second-tier zone divisions.

With team-mate Fernando Verdasco having recovered from a set down to beat world number 40 Alexandr Dolgopolov, Nadal can win the tie if he and Marc Lopez beat Vladyslav Manafov and Denys Molchanov in Saturday's doubles.

"Once I have made the effort to come here, to play the doubles is only a small extra effort," added Nadal.

"Hopefully we can finish the match tomorrow and then I can rest on Sunday."