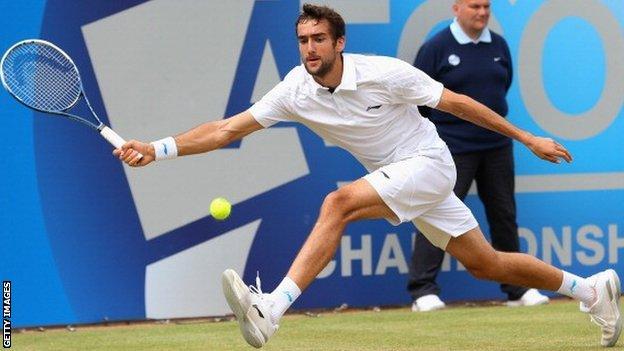 Croatia's Marin Cilic has been suspended for nine months after the world number 24 tested positive for banned supplement nikethamide.

Traces of the prohibited glucose supplement were found in a urine sample provided by Cilic in Munich in April.

The 24-year-old, who has not competed since he withdrew from Wimbledon, will appeal against his ban at the Court of Arbitration for Sport "very soon".

The ban has been backdated to 1 May, meaning he can return on 1 February.

Cilic, the 2012 Queen's champion, said a member of his team had bought Coramine glucose tablets at a pharmacy.

Born on 28 September, 1988, in Medjugorje, a town in Bosnia-Herzegovina close to the border with Croatia.

Started playing tennis at the age of seven with his cousin during a summer holiday.

Highest career ranking is ninth, and he has earned around £4m from the sport.

In a statement, he revealed he could not discuss the case but said: "Unbeknownst to me, the glucose tablets contained a substance that is banned in-competition (although it is allowed out-of-competition).

"I wish to emphasise that I have never knowingly or deliberately taken any banned substances in my life and that I am opposed to any use of performance-enhancing substances in sport."

The International Tennis Federation said an independent tribunal found that Cilic had inadvertently ingested the nikethamide as a result of taking the tablets and "did not intend to enhance his performance in doing so".

Cilic reached the last 16 at the Munich Open but that result is now null and void, while ranking points and prize money won since that tournament and up until his suspension will be forfeited.

The former Australian Open semi-finalist, his country's highest ranked player, was knocked out of the French Open in the third round by Viktor Troicki, who was banned in July for 18 months for failing to provide a blood sample at the Monte Carlo Masters in April.

Cilic reached this year's Queen's final where he was beaten by Britain's Andy Murray.

He then withdrew before his second-round match against Kenny de Schepper at Wimbledon and will also miss the Australian Open while he serves his ban.