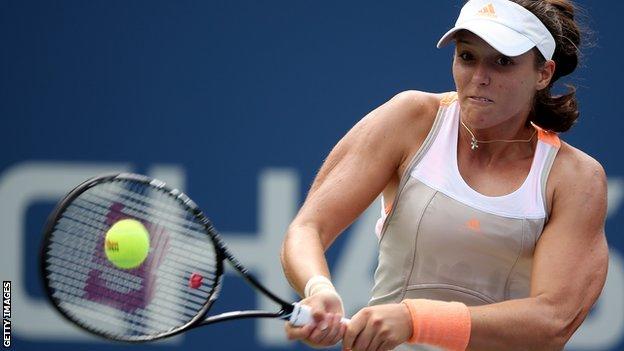 Laura Robson secured a comfortable first-round win over Jovana Jaksic to progress at the Guangzhou Open.

The 19-year-old, who became the first British woman in 22 years to reach a WTA final at the same tournament in China last year, won 6-2 6-4.

This week sees the start of the 'Asian Swing' of tournaments, and a key part of the season for Britain's top two women.

Laura Robson, ranked 35, will hope to have fully recovered from the wrist injury that dogged her at the US Open as she defends the points earned in Guangzhou last year, when she reached her first and, to date, only WTA final.

Heather Watson is down to 78 in the rankings from a high of 39 in February, since when she has won just four matches, due largely to a bout of glandular fever that sidelined her for two months. She has since changed her coach and introduced a more attacking game plan, and next month must defend the points she gained in winning her first WTA title in Osaka last year.

Third seed Robson will play Chinese wildcard Saisai Zheng in the second round in Guangzhou.

The Briton is the highest-ranked player left in her half of the draw after Romanian top seed Sorana Cirstea lost 6-2 6-1 to Bojana Jovanovski.

Konta, ranked 141st on the WTA Tour, came through two rounds of qualifying before beating Hogenkamp.

The British number three next faces China's fourth seed Shuai Peng, who beat Shahar Peer 6-3 6-4 in round one.

Elsewhere, British men's number three Dominic Inglot qualified for the St Petersburg Open but went out in the first round following a 6-4 6-4 defeat by Italian Fabio Fognini.