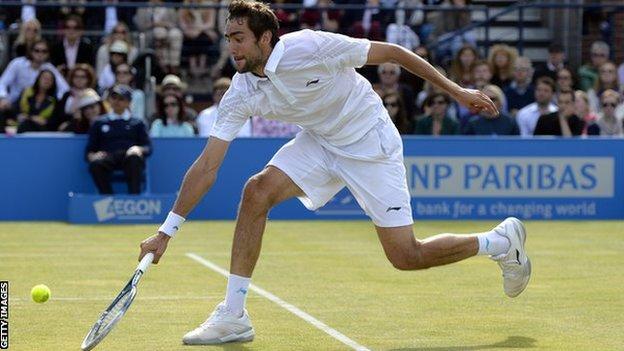 A glucose tablet purchased at a pharmacy in France is likely to cost Marin Cilic nine months of his tennis career.

The International Tennis Federation's (ITF) independent tribunal accepts that the 24-year-old inadvertently ingested nikethamide through the tablet, and that he had no intention of enhancing his performance. All of which gave it the scope, within the guidelines, to reduce Cilic's ban from a maximum of two years.

Nikethamide is a short-acting stimulant, which used to be prescribed for an overdose of sedatives, and there is no reason to believe that Croatia's world number 24 is guilty of anything other than naivety or carelessness, as his former coach Bob Brett suggested in a BBC World Service interview.

Suspensions are, though, consistently being reduced because of mitigating circumstances. So perhaps it is time to discard sentiment, and set a stronger deterrent by forcing players to take even greater responsibility for what enters their system.

Born on 28 September, 1988, in Medjugorje, a town in Bosnia-Herzegovina close to the border with Croatia.

Started playing tennis at the age of seven with his cousin during a summer holiday.

Highest career ranking is ninth, and he has earned around £4m from the sport.

In recent months, Serb Victor Troicki has had a potential two-year ban for refusing to undergo a blood test in Monte Carlo reduced to 18 months because of the "stress that he was under at the time".

Czech player Barbora Zahlavova Strycova tested positive for a stimulant at last October's Luxembourg Open. At her hearing, she said it was contained in a supplement and denied that it was performance enhancing. Again, the tribunal accepted this, and reduced her default ban from 24 to six months.

The Court of Arbitration for Sport (Cas) is currently studying an appeal from Troicki, and will soon be approached by Cilic.

Cas has reduced the length of suspensions to tennis players on two occasions since August 2011, and there seems to be an acceptance within the sport that mitigation is appropriate to distinguish between the careless and the cheats.

"At one end of the range there is a player who deliberately cheats and takes an anabolic steroid with the intention of enhancing their performance.

"At the other end there is a player who inadvertently, or technically, breaches the rules with very little, if any fault, in doing so.

"To me, it does make sense that there should be degrees of sanction. If there wasn't any mitigation at all, I think that would be a fairly draconian application of the World Anti Doping Programme. In my view, that would be unfair."

Novak Djokovic, Andy Murray and Roger Federer have all called for more drug testing, and Rafael Nadal for greater transparency into exactly who is being tested, and how often.

The ITF's own figures show that fewer in-competition blood tests have been taken over the past couple of years, although out-of-competition tests increased markedly last year, and the sport's very own biological passport scheme (in which individual electronic documents provide a profile of an athlete's standard biological make-up) is now up and running.

Figures for last year show tennis carried out 2,185 urine and blood tests in 2012. Of those, 124 of these were in-competition blood tests.

As for those who have infringed, there should be very little excuse in this day and age.

All the regulations are available on the ITF website, and players can download a wallet card to carry around with them at all times.

It can't be much fun having to inform the authorities, up to three months in advance, exactly where you will be for a potential drugs test for one hour of each day.

Many modern athletes may feel they are paying for the sins of a past generation, but it is has to be done to maintain the integrity of all sport.

That is why there cannot be much sympathy for those who fall foul of the rules.