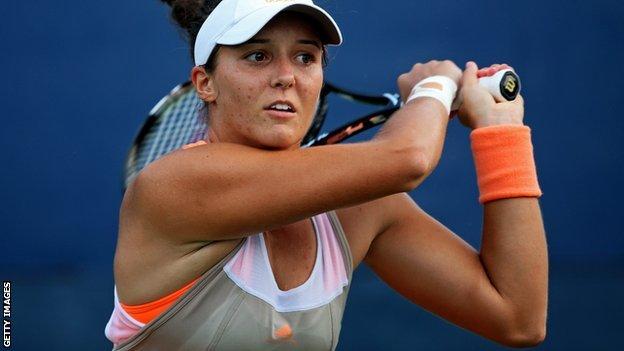 Great Britain's Laura Robson was beaten in three sets by Zheng Jie in the quarter-finals of the Guangzhou Open.

Robson, last year's runner-up, eased through the first set but lost the second on a tie-break.

Konta, the British number three, had defeated number four seed Shuai Peng in straight sets in the second round on Wednesday.

With second-seeded French player Alize Cornet also beaten by Austria's Yvonne Meusburger in the quarter-finals, Robson, at three, missed the chance to be the highest-ranked player in the last four.

The 19-year-old, who became the first British woman to reach a WTA singles final in 24 years with her run 12 months ago, broke Zheng twice in the first set.

But the British number one's serve faltered in the second and third, the former having been surrendered after a rain delay.

Home favourite Zheng, the former world number 15, went on to complete victory in two hours and 16 minutes and will meet Puerto Rico's eighth-seeded Monica Puig in the semi-finals.