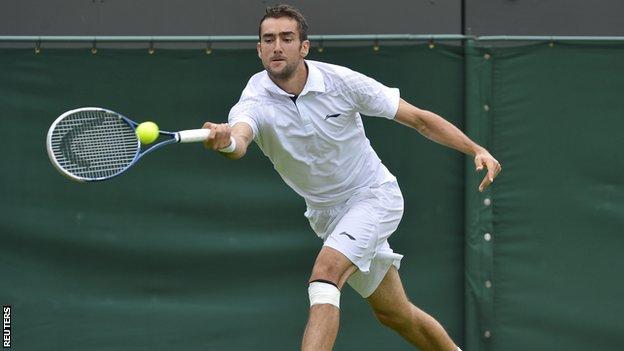 Marin Cilic pulled out of Wimbledon this year because of a failed drugs test and not because of an alleged injury.

An independent International Tennis Federation anti-doping tribunal heard how the Croat withdrew from his match against Kenny de Schepper having accepted a provisional drugs ban.

He cited a knee injury at the time.

He withdrew from Wimbledon, citing a knee injury to avoid adverse publicity

His withdrawal was one of seven through injury at Wimbledon, causing the ITF to call for an inquest into the state of the courts.

But the tribunal revealed the injury was cited in order to avoid "adverse publicity" regarding the drugs case.

Cilic, the number 10 seed at Wimbledon, will miss the Australian Open in January.

The ITF independent tribunal accepted that Cilic inadvertently ingested Nikethamide through a glucose tablet and that he had no intention of enhancing his performance.

Cilic said he was under stress because of problems between his parents and coach Bob Brett but the tribunal said: "We do not think that the stress the player was suffering is a factor of great weight.

"Conditions in the highest echelons of professional sport are inherently stressful."

Cilic has said he will appeal against his ban at the Court of Arbitration for Sport.