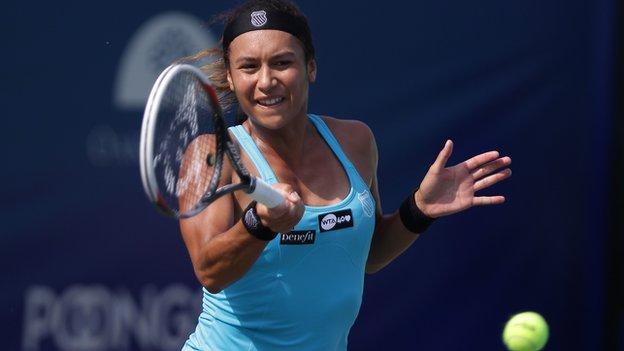 British number two Heather Watson has been knocked out of the China Open at the first-round stage with a three-set defeat by American Varvara Lepchenko.

Watson, 21, beat the world number 55 at this year's Aegon International but was unable to repeat the feat despite taking the first set.

She will face Petra Kvitova, ranked 11 in the world, in the second round.

Watson, who had overcome Lepchenko in straight sets in Eastbourne in June, has struggled for form since losing in the first rounds of the US Open in August and Korea Open this month.

Gaining the first set initiative with a break to 30 in the fourth game, Watson broke again before emphatically holding serve to love to take the opening set on the Lotus Court at Beijing's National Tennis Centre.

Lepchenko, six years the senior of Watson, swung the momentum early in the second set with an early break and built on her good play to break again and force a decider.

The pair held serve for six games in a tense final set, but the decisive moment arrived when Watson was unable to muster a point on her own serve in the seventh.

The lapse gave Lepchenko all the opportunity she needed and a second break secured a 6-3 final set win and a place in round two against ninth seed Kvitova.

Great Britain's other interest in the draw - Laura Robson - will face world number 33 Klara Zakopalova for her chance to reach the second round.

Kvitova, 23, is set to move up from 11th to seventh in the rankings as she closes in on a spot at the WTA Championships in Istanbul next month.

"It's always a great feeling if you win a title at a tournament. It means a lot for me. I'm glad I have some points toward the Championships," said Kvitova.

"I still have some tournaments left but I want to focus on today. I just want to enjoy."