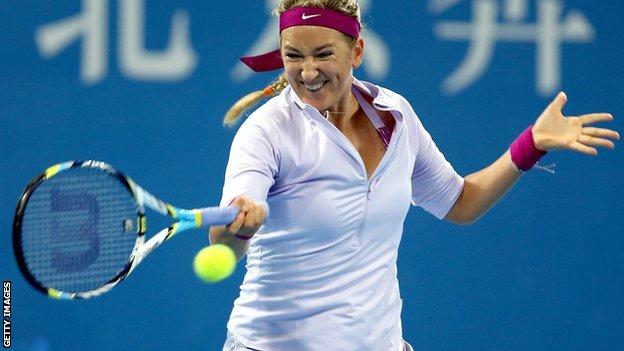 Victoria Azarenka's defence of her China Open title lasted just one match as she was surprisingly beaten by German world number 43 Andrea Petkovic.

Azarenka served 15 double faults and made 44 unforced errors, while Petkovic took a medical time-out in the second set after appearing to feel dizzy.

It was an awful match and very bad performance from me

After taking the opening set, 26-year-old Petkovic looked in discomfort during the second and lost seven straight games as the second seed forced the decider.

The players traded breaks in reaching 4-4 in the third set but Azarenka's 15th double fault on break point left her opponent to serve out the match.

"It was an awful match and very bad performance from me, so not much to say," said Azarenka, in the US Open final earlier this month.

"It happens once, twice a year to every player, and happened to me today.

"If I'm going to be doing it again, I probably should have taken a longer break (between tournaments) and just prepared myself. I don't feel like I was ready to play.

Petkovic said: "I'm very happy with my performance. I was happy with my movement and my serve for the most part, and I managed to get a lot of balls back very deep and very strong.

"Parts of the match were a really, really good level - some parts I lost a bit of energy, but overall I'm very happy."

Meanwhile, fifth seed Sara Errani of Italy reached round three with a 6-3 6-2 win over Misaki Doi of Japan.

Williams and Britain's Laura Robson play their second-round matches on Tuesday, when Rafael Nadal and Novak Djokovic begin a week that will