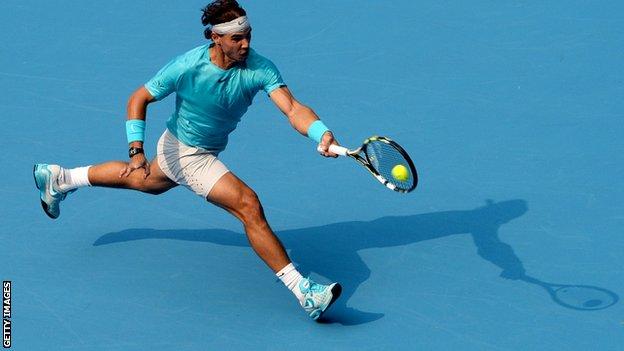 Rafael Nadal battled back from the brink of defeat to beat Italian Fabio Fognini and reach the semi-finals of the China Open.

Nadal, 27, will regain the world number one ranking if he beats fourth seed Tomas Berdych in the semi-finals.

It is not the moment to think about number one

A return to the number one ranking for the first time since July 2011 was looking unlikely for Nadal after he lost the first set against Fognini and was just a point away from trailing 5-1 in the second.

But the Mallorca-born left-hander - who looked to be struggling with his knee at one point - rediscovered his form, relinquishing just one more game to the world number 19 on his way into the final four.

Nadal is enjoying one of his best years despite missing the Australian Open with a knee injury, and he remains unbeaten on hard courts in 2013 having

On the possibility of replacing Djokovic as world number one, he said: "It's something that doesn't create more pressure for me.

"It's something that already happened in the past. If that happens again, it will be good, it will be special for me."

The Dane offered brief resistance to break Williams's serve in the sixth game of the second set before the 32-year-old American went on the offensive in a 38-shot rally in the seventh.

Williams, winner of 17 Grand Slam singles titles, extinguished any hope of a comeback to book a semi-final meeting with Poland's third seed Agnieszka Radwanska, who beat Angelique Kerber of Germany 7-6 (9-7) 6-4.

"I played well in the second set too, but I think Caroline just played so much better and she lifted her game so much.

"But I think overall it was the best performance I've had this week, which I'm excited about."

There was disappointment for home favourite Li Na, who was beaten 4-6 6-2 6-4 by 2011 Wimbledon champion Petra Kvitova.

The Czech left-hander will face Serb Jelena Jankovic, a 6-7 6-4 6-4 winner over Lucie Safarova, in the last four.