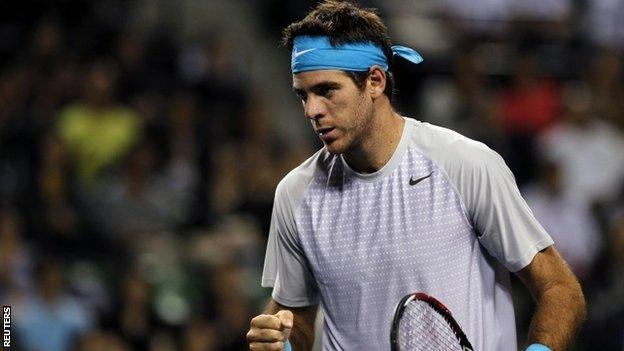 In the men's doubles, Briton Jamie Murray and Australia's John Peers are through to the final after beating Austrians Julian Knowle and Jurgen Melzer 6-3 6-4.

The Thailand Open champions will go up against Rohan Bopanna of India and Edouard Roger-Vasselin of France in the final on Sunday.

Argentina's Del Potro, 25, has secured titles in Rotterdam and Washington already this year, as well as being runner-up to Rafael Nadal at Indian Wells in March.

"We both played at our maximum," said world number seven Del Potro.

"He hit some unbelievable shots and I had to come back with some amazing shots. One or two points can be the difference and I played two good tie-breaks and played well at the important moments."

Raonic, who took the Thailand Open title on Sunday, won six straight points in the tiebreak against Croat Dodig and eased through the second set to reach the final for the second year in a row.

The 22-year-old, ranked 11th in the world, lost in the final of last year's tournament to local favourite Kei Nishikori.