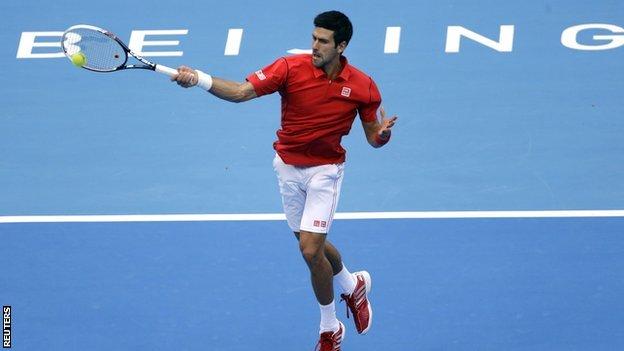 Rafael Nadal may be set to overtake Novak Djokovic and regain the world number one spot, but he was beaten by his rival in the China Open final.

An inspired Djokovic won 6-3 6-4 against his Spanish opponent, who will move to the top of the men's rankings on Monday after reaching the final.

The Serb, who broke in each set on his way to winning, said: "I needed this.

"I wanted to win against Nadal, who has been the best player so far in 2013. It's important for my confidence."

Djokovic, who won the China Open for a fourth time, started strongly and set the tone for the match by breaking Nadal's first service game as he raced into a 3-0 lead.

The break proved crucial as the Serb produced some impressive tennis, with the timing and depth of his strokes not allowing Nadal the chance to get his game going.

Djokovic dragged Nadal out wide with his serve and struck a powerful forehand into open space to wrap up the opening set after 35 minutes.

The start of the second set saw Djokovic immediately break the Spaniard again and he continued to hold the initiative in commanding style.

He took the following game to love and, as Nadal struggled to put pressure on his serve, went on to secure an emphatic win.

Djokovic added: "It's been an incredible week again at the China Open and I still haven't lost a match here - I just love the conditions, the court and the atmosphere that goes around the tournament.

"I managed to stay tough and not drop my concentration, which I think [happened] in both Montreal and at the US Open in the important moments.

"I've learnt my lesson from a few very tough and close matches that I lost against Rafa on hard courts, especially the last one in the US Open final."

Nadal, who will return to the top of the rankings for the first time since July 2011, failed to engineer a break point as his run of 21 matches unbeaten came to an end in Beijing.

He said: "I couldn't see a way to stop him and he was too strong for me.

"I didn't play my best match. It was difficult to create spin on this ball and he was able to hit all the balls where he wanted.

"When that's happening against a player like Novak, you are dead - you don't have a chance."