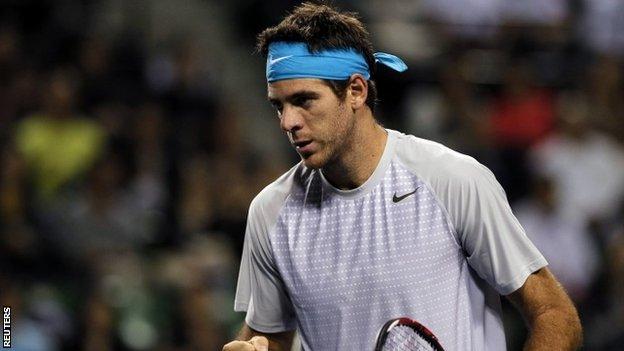 The 25-year-old Argentine saved three break points in the first set before winning it with his fourth ace.

Canada's Raonic fired down 17 aces but was broken for the only time in the match in the 11th game of the second set, and Del Potro served out the win.

Del Potro - a wildcard addition after the injured Andy Murray withdrew - takes his third title of the year.

He won in Rotterdam and Washington DC and was runner-up at Indian Wells.

The 2009 US Open champion secured the crucial break with a backhand volley but he double-faulted on his first match point in the next game.

However, a whipped forehand pass sealed the win and lifted the South American up from sixth to fifth in the Race to London standings for the season-ending World Tour.

Raonic moved up to 10th in the standings, with the top eight qualifying for the event which takes place at the O2 Arena from 4-11 November.