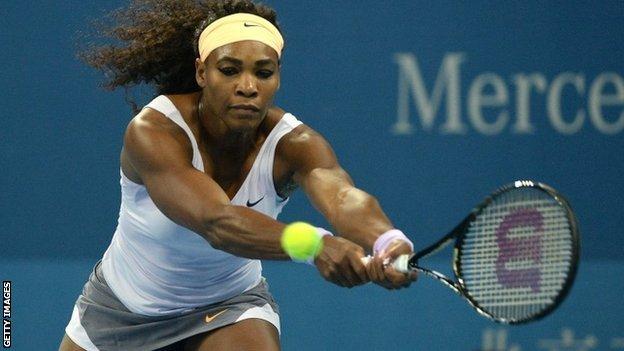 Serena Williams continued her excellent form in 2013 as she beat Jelena Jankovic 6-2 6-2 to win the China Open.

Williams appeared in pain after serving an ace in the third game of set two as Jankovic broke for the only time but the Serb was the one who had to take a medical time out for a hip problem.

"I'm really excited - I didn't think I'd win this tournament starting out, so I'm really happy to be here holding the trophy

The eighth-seed then lost the next five games as 32-year-old American Williams captured her 10th title of the season.

"I'm really excited - I didn't think I'd win this tournament," she said.

"Congratulations to Jelena for such a great tournament as well.

"I really love tennis so much and it's fans like the ones here in China who are so exciting to come to. The fans make me want to play, and they're so great here, so coming here is such a great opportunity."

Jankovic herself acknowledged she had been well beaten by the 17-time major singles winner, saying: "Serena was just too good and big congratulations to her."