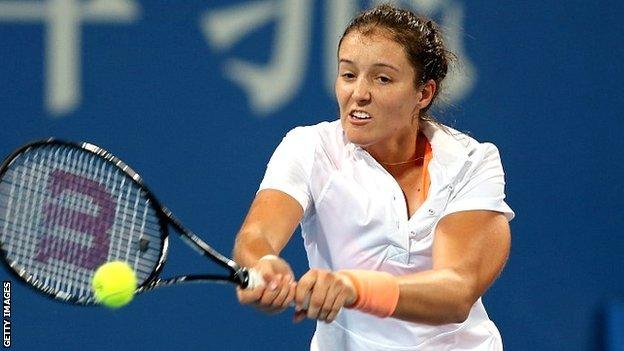 British number one Laura Robson joined compatriot Heather Watson in going out of the Japan Open in the first round after suffering a 6-4 6-4 loss to home favourite Kimiko Date-Krumm.

Robson, 19, is 24 years younger and ranked 12 places higher than Date-Krumm but was beaten in 86 minutes.

"Laura Robson admitted at the US Open that she is yet to discover the secrecy of consistency away from the Grand Slams, and she has been unable to unearth it in Asia over the past few weeks. The British number one is still only 19 and may end the season ranked slightly higher than she did last year, but will want to prove in 2014 that she can be just as good as other emerging stars like Eugenie Bouchard and Madison Keys."

World number 42 Robson was particularly vulnerable on her second serve, losing 18 of 27 points.

While Robson has struggled to build on her victory over Klara Zakopalova in the China Open a fortnight ago, Date-Krumm will face fellow Japanese player Misaki Doi in the next round, ensuring at least one home representative in the last eight.

Robson lost to Date-Krumm in the first round of the same tournament in 2010 when she was making her first steps into top-level tennis.

The teenager, who hired Andy Murray's former coach Miles Maclagan for a short period earlier this summer, has not progressed to the fourth round of any tournament since losing to Kaia Kanepi in the last 16 of Wimbledon in June and has won only 11 matches on the WTA Tour all season.

She has also slipped down from a career-high world ranking of 27 in the wake of her run at the All England Club.

Elsewhere in the tournament, world number 94 Vania King from the United States made light of the 63 ranking places separating her from Flavia Pennetta, beating the Italian 3-6 7-5 6-0.