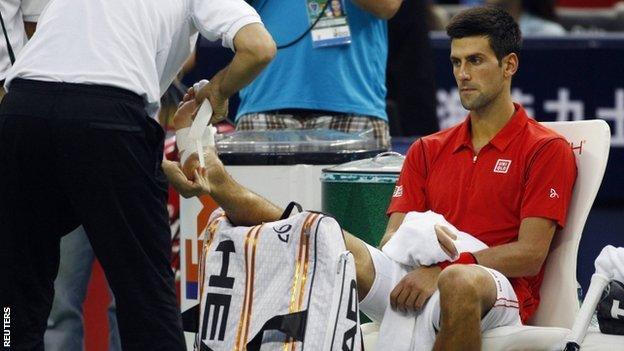 World number two Novak Djokovic overcame an injury scare to beat Spain's Marcel Granollers and reach the third round of the Shanghai Masters.

The Serb landed awkwardly on his right foot early in the second set and had a medical timeout before winning 6-2 6-0.

"It was just an awkward movement," he said. "I was running and made a quick movement that caused a sharp pain. It's all good now."

There were also comfortable wins for Roger Federer and Rafael Nadal.

Fifth seed Federer beat Andreas Seppi of Italy 6-4 6-3, while Nadal, who reclaimed the number one ranking this week, dispatched Alexandr Dolgopolov of Ukraine 6-3 6-2.

Djokovic hit a running backhand in the first game of the second set and then leaped in the air, wincing in pain. He appeared slightly tentative after having his foot and ankle wrapped, but he still dominated against the Spaniard, ranked 36 in the world.

He next plays Italian Fabio Fognini, who advanced when Spaniard Tommy Robredo retired with a wrist injury while trailing 7-6 (7-3) 2-1.

Federer was returning to the court for the first time since his fourth-round loss at the US Open but was too strong for Seppi.

"Even though it remained tough, Seppi did a good job of hanging around," said Federer, who has dropped to seventh in the world. "That's the kind of match you want in this particular situation I'm in right now."

He next plays Frenchman Gael Monfils, before a potential quarter-final against Djokovic.

In the opening round of the men's doubles, the British pair of Colin Fleming and Jonathan Marray fought back from losing the first set to win 3-6 7-5 10-7 against Mexico's Santiago Gonzalez and American Scott Lipsky.

Britain's Dominic Inglot and Treat Huey of the Philippines beat Max Mirnyi of Belarus and Romania's Horia Tecau 6-7 7-6 17-15, while Jamie Murray was also a winner as he and Australian John Peers beat Lukas Rosol of the Czech Republic and Australian Bernard Tomic 7-5 6-4.