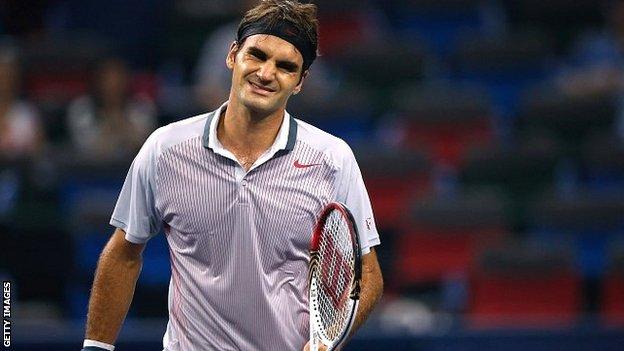 Roger Federer's hold on a place in the World Tour Finals is increasingly shaky after he lost 6-4 6-7 (5-7) 6-3 to Gael Monfils in the Shanghai Masters.

Federer dropped to seventh in the world rankings on Monday and the 17-time Grand Slam champion was close to a straight-sets defeat at 6-4 5-3 down.

The 32-year-old Swiss rallied to snatch a tie-break, but suffered a decisive break in the decider's fourth game.

"This was a typically charismatic performance by Gael Monfils, but unfortunately we are growing accustomed to watching Federer make uncharacteristic errors at key moments of a match. The 32-year-old has only two more tournaments in which to secure a 12th consecutive appearance at the World Tour Finals.

"Both events take place indoors, which is very much to his liking, but should Stanislas Wawrinka beat Milos Raonic in Shanghai later, and Jo Wilfried Tsonga go on to reach the final, then Federer would find himself relegated to the final qualifying position."

The Spanish third seed is already safely qualified for the World Tour Finals however, while Federer's place at London's O2 Arena in November is still in the balance.

Federer's qualification for a 12th successive season finale depends on staying among the top eight players in the world and, despite world number three Andy Murray's withdrawal opening up another spot for the event, countryman Stanislas Wawrinka, Canada's Milos Raonic and French pair Richard Gasquet and Jo-Wilfried Tsonga are all within striking distance of the Swiss.

"I hope I don't have to rely on it," said Federer of Murray's absence from the World Tour Finals. "That's not really what I want.

"I'm just going to try to have a good tournament in Basle and Paris. In the end, if I get the invite, I'll be there."

The victory was only Monfils's second in eight meetings with Federer and continues a run of form that have carried him up 77 ranking places to 42nd in the world since May.

Monfils will play top seed and defending champion Novak Djokovic next after the Serb showed little sign of an injury that briefly interrupted his second-round win over Marcel Granollers in beating Italy's Fabio Fognini 6-3 6-3.

Spain's Rafael Nadal,who overtook Djokovic to become world number one for the first time since June 2011 this week, extended his 2013 record to 67 wins from 71 singles matches by inflicting a 6-1 7-6 (7-5) defeat on Argentina's Carlos Berlocq.

But Juan Martin del Potro, via a withdrawal from German veteran Tommy Haas, and Tsonga, courtesy of a 7-6 (7-5) 6-0 win over Kei Nishikori, also strengthened their claims to a place in the World Tour Finals in advancing the last eight.

British paring Colin Fleming and Jonathan Marray fell 6-2 6-4 to Spanish duo Granollers and Marc Lopez in the second round of the doubles.

Londoner Dominic Inglot however enjoyed a 7-6 (7-4) 5-7 10-6 win over Rohan Bopanna and Eduard Roger-Vasselin alongside Filipino playing partner Treat Huey, while Jamie Murray and Australia's John Peers also made the third round.