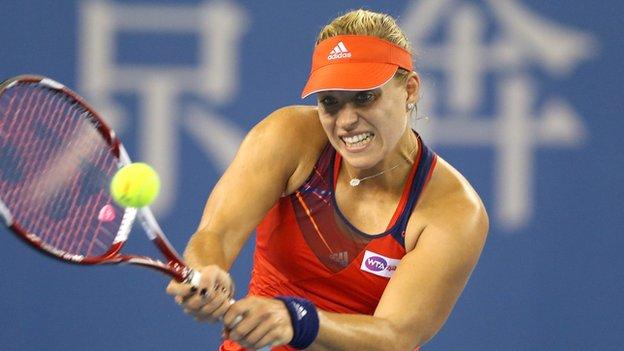 Germany's Angelique Kerber has secured the last place at the WTA Championships in Istanbul - after victory in Linz.

World number 10 Kerber grabbed the eighth and final spot at the showpiece end-of-season event after winning her quarter-final in Austria on Friday.

Regardless of the result Kerber will now compete at the WTAs on October 22.

"Qualifying for Istanbul is a great achievement."

"Qualifying for Istanbul is a great achievement" Kerber said.

"It's the reward for my consistency though I've had my ups and downs and a couple of injuries this year."

She saved a break point at 3-2 down in the first set before winning nine straight games to lead 6-3, 5-0.

The German - who required only one match point - added: "I was a bit nervous at the start and Patricia played really well, then I settled and felt more relaxed."

America's Sloane Stephens misses out on Istanbul after losing to Switzerland's Stefanie Voegele, 6-7 (3-7) 6-4 7-5

This year the German lost in the final at Monterrey to Anastasia Pavlyuchenkova and reached the semi-finals at both Indian Wells and Stuttgart - followed by a quarter-final exit in Madrid at the hands of Ana Ivanovic.