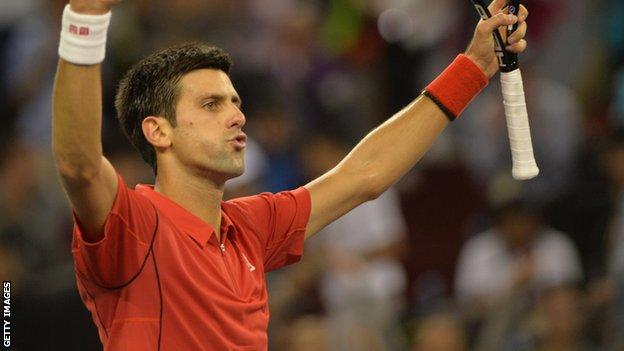 The 26-year-old took advantage of the Argentine's sloppy service game in the first set before his opponent fought back to take the second and level.

Del Potro saved two match points in the 10th game of the decider, but the Serb proved too strong in the tie-break.

The Shanghai crown is Djokovic's fifth ATP Tour title of the year.

The victory also caps a good two weeks in the country for the six-time major winner, who came into the tournament having beaten world number one Rafael Nadal to land his fourth China Open title.

"It was a great experience again in Shanghai with a thrilling performance from both my opponent and myself," said the 2013 champion.

"I think the tournament had a fantastic final. I'm just very glad to go out as a winner from the court tonight from such a close match."

In Sunday's final, Djokovic raced through the first set as his opponent failed to find any rhythm with his first serve, winning just eight points from 14. The figures were worse on his second serve - three from 11.

The Australian Open champion broke Del Potro in the second and fourth games before the Argentine finally opened his account for 5-1. However, Djokovic took a one-set advantage when the world number five's return went wide in the next game.

Del Potro improved in the next set and carved out two breaks points in the second game, taking his chance at the first attempt with a great return that brushed the line. He then held serve and took the set with a love game in the ninth.

There was little between the players inside the Qizhong Arena during the decider until the 10th game, when Djokovic had two match points at 5-4. He wasted the first with a long return and was then deceived by the kick of Del Potro's serve.

However, Djokovic made the most of his opportunities in the tie-break - and produced arguably the shot of the match when he hit an incredible cross-court dipping volley to take the mini-break to go 4-2 up.

The former world number one then held his nerve to take his 15th Masters title, while Del Potro's search for his first continues.