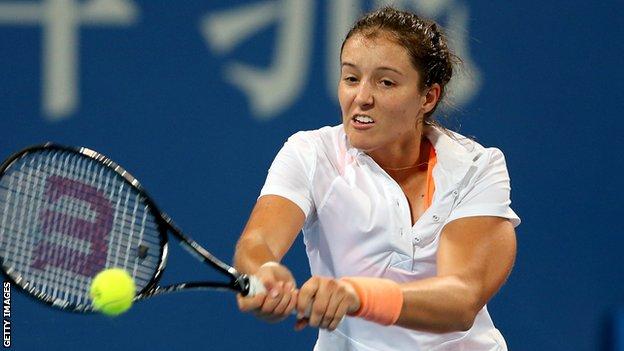 Laura Robson has split from coach Miles Maclagan just four months after starting work with the man who was once part of Andy Murray's backroom team.

The British number one, 19, linked up with Maclagan after ending her nine-month stint with Croat Zeljko Krajan.

"Robson informed Maclagan in a telephone conversation at the weekend that she wants to try a fresh approach in 2014. Her enthusiasm to extend the relationship waned as she experienced a disappointing run of results in Asia. Croatia's Davis Cup captain Zeljko Krajan questioned Robson's work ethic when they parted company in the spring. Maclagan is a very different personality, so the 19-year-old must now consider very carefully who she does think can best harness her talent, and help improve her consistency away from the Grand Slams."

But after three wins in four events, Robson has opted for another change.

"Miles and I have decided not to continue our partnership," said the teenager, who team up with Maclagan prior to the grass-court season.

The left-hander, who was previously coached by Patrick Mouratoglou and Martijn Bok, added on her Facebook page: "I want to thank Miles for stepping in on quick notice to be my coach this summer.

"I have great respect for him and a person and coach and look forward to continuing our friendship.

"I will take a couple weeks off to refresh my mind and body and will keep my fans updated on my coaching situation."

Robson, who won the girls' singles title at Wimbledon in 2008, is currently ranked number 46 in the world.

She made the last 16 at Wimbledon and reached the third round of the US Open, but has suffered from illness in a difficult end to the season.

The link-up with Robson was Maclagan's first women's tennis assignment, although he was never officially titled as her coach.

He told BBC Radio 5 live in June: "It's a new challenge and that's why we have a trial period - to see what happens."