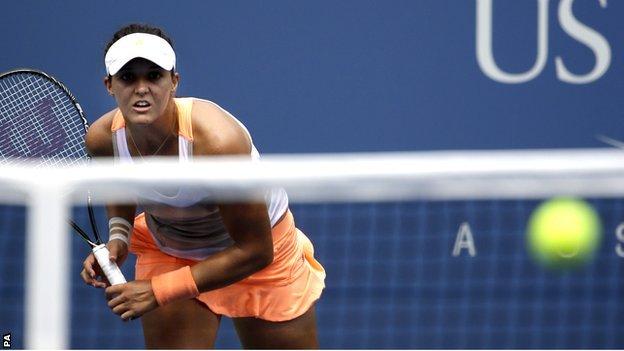 Coaching Laura Robson may not offer much in the way of long-term security, but it's a job creating a good deal of interest among some high-profile names.

The British number one told Miles Maclagan in a telephone conversation on Saturday that she doesn't want to extend their partnership into 2014, which means that Robson, her mother Kathy and new agent Max Eisenbud are now looking for what will be Laura's fifth coach in three years.

Robson's ball-striking ability and big-match temperament are a huge attraction to prospective coaches, and having decided to join IMG just after Wimbledon, she now has the support of the most influential agent in the women's game.

"She's still only 19, and clearly she's had a high number of coaches. The ideal situation would be to try and build a relationship over a period of time but it's not always that straightforward."

Eisenbud also looks after world number three Maria Sharapova and world number five Li Na - and it is one of their former coaches who seems very keen on the job.

Thomas Hogstedt, 50, has been taking quite an interest in the 19-year-old for a while. At this year's Wimbledon, in what turned out to be his final tournament with Sharapova, the Swede quizzed one leading British coach about her prospects on the practice courts. He is also said to have the ear of Robson's mother Kathy, who in the past has sought his advice about her daughter's career.

Sharapova said that Hogstedt's desire to reduce his time away from home was behind their decision to separate, but if there was an element of diplomacy in those words, then the Swede would be a very strong contender.

His practice sessions with Sharapova were always intense, and under his guidance the Russian returned to number one in the world by completing the career Grand Slam at Roland Garros in 2012.

Nigel Sears, 56, is another coach believed to be interested in the job. He knows Robson well from his spell as the head coach of women's tennis at the LTA and is a free agent, having split with the former world number one and French Open champion Ana Ivanovic after Wimbledon.

Michael Joyce - who coached Sharapova before Hogstedt - is understood to have been sounded out about coaching Robson in the past, and Sven Groeneveld is another strong option.

The Dutchman has coached Monica Seles, Mary Pierce and Ivanovic to Grand Slam titles, and has been an important figure in Robson's development. As one of the leading coaches of the Adidas Player Development Programme, he most recently lent his support to Robson in May as she beat Venus Williams before losing to her sister Serena in Rome.

He would need to decide whether he is prepared to exchange the relative security of his current job for the uncertainty linked with coaching any player full-time.

Robson is currently taking a couple of weeks off to "refresh her mind and body," and would be well advised to spend some time reflecting on what she needs to do to get the best out of her next coaching relationship.

Alan Jones, who coached Jo Durie to number five in the world, and later became Robson's first permanent coach, is fascinating on the subject: "This young lady has an enormous amount of ball-striking talent and likes the centre stage, but it's not rocket science to say she needs to move better.

"I've not really seen her improve her footwork relative to the oncoming ball for the last four or five years. That's why I keep saying at what stage will Laura take on the responsibility that she personally needs? What was so obvious to me when I had my years out there is that the best players knew what they wanted, and they were prepared to go that extra mile for it.

"I remember the great Rod Laver saying many years ago that you are likely to change coach as you go from a teenager to a man, and then maybe once again, but if you start seeking out coaches, are you avoiding looking at yourself?

It's easy to dismiss a coach, but you've got to live with yourself. Is she prepared to hurt that much to make enough sacrifice on the physical side to complement the wonderful ball striking that she has?

"It is all very well wanting to be a tennis player and living a bit of a dream, but when reality strikes, it's quite a brutal world. You've got to become a warrior, and that may be the area she's struggling to deal with - the warrior side of herself."

The LTA, who still fund some of Robson's costs, will also be on hand to offer their number one women's player some advice. Iain Bates, who is the organisation's head of women's tennis, describes Robson's split with Maclagan as "unfortunate."

"She's still only 19, and clearly she's had a high number of coaches," he said.

"The ideal situation would be to try and build a relationship over a period of time but it's not always that straightforward. Try and take some time to get used to it, but at the end of the day, it's about making sure you can work together as a team where you can both move Laura's career forward."