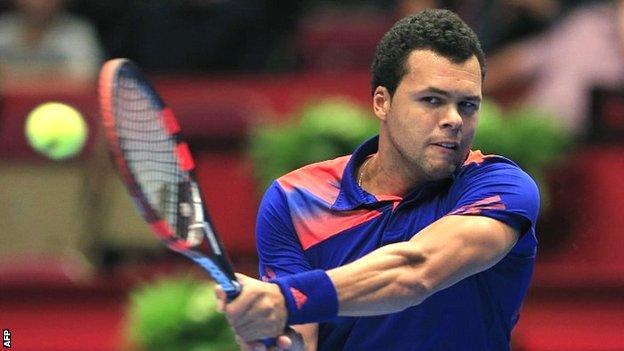 Jo-Wilfried Tsonga's hopes of reaching the season-ending ATP World Tour Finals suffered a setback as he lost to Robin Haase in the Austrian Open semi-finals.

Victory would have seen Tsonga replace Roger Federer in the seventh of eight qualifying places, but he was upset 7-5 7-6 (7-4) by 63rd-ranked Haase.

Standings will be updated on Monday, 21 October

Furthermore, Richard Gasquet's run to the Kremlin Cup final will see him replace Tsonga in the top eight.

Milos Raonic and Tommy Haas remain in contention for the London event.

Raonic, 10th in the qualification race, saw his hopes dented with a quarter-final loss to Benoit Paire in Stockholm.

But Haas beat Lukas Rosol to set up a meeting with Haase in Vienna and boost his ambitions ahead of the 4-11 November Tour Finals.

When the latest standings are released on Monday, Tsonga will find himself ninth behind Federer and Gasquet.

The order of Federer and Gasquet will depend on whether or not the Frenchman beats Mikhail Kukushkin in the Kremlin Cup showpiece.

Another to progress in Moscow was Samantha Stosur, who saw off Svetlana Kuznetsova in the women's semi-finals.

But there was disappointment for British brothers Ken and Neal Skupski as their first ATP World Tour doubles final ended with a 6-2 1-6 14-12 defeat by Mikhail Elgin and Denis Istomin.